Collinwood in the year 1970. A year that will see an unknown disaster demolish the great house, unless Barnabas Collins and Julia Hoffman can learn how to prevent it. Meanwhile, unknown to them, Hallie and David have set out to search for a secret playroom. A room that is part of the coming tragedy.

David and Hallie enter the West Wing and open the door to what would be the playroom. They discover it's only a linen closet, but can hear music coming from behind a wall. Hallie smells lilacs and Daphne appears, prompting the children to run.

The children return to David's room and talk about what they just saw. David is convinced she has something to do with the playroom and suggests they go back and look through the old letters they were reading earlier.

Meanwhile, Barnabas and Julia are in the drawing room, still looking through history books from the early 19th century. Thus far, they have only been able to learn when Tad and Carrie were born and when they died. Julia points out that the children from that time period died at the same age David and Hallie are currently, which has Barnabas worried. Quentin walks in and asks how things are going, much to the frustration of Barnabas and Julia. Quentin walks to the window and looks out at the night sky. There is going to be a full moon tonight, and he can't help but think of Chris, Amy, and Sabrina, who have apparently left Collinwood forever. Quentin also invites Barnabas and Julia to the tower room to watch the eclipse with him, but the two turn down his offer. As he leaves, Quentin mentions how fascinating it is to see the earth block out the moon. Barnabas then realizes that an eclipse was the first clue Carolyn had written about in 1995: "The night of the sun and the moon."

Julia suggests they tell the children what is about to happen, but Barnabas isn't sure if it's such a good idea because it will create a sense of panic throughout the house. Regardless, Julia promises to keep an eye on them.

Upstairs, David and Hallie are still going through the old letters. David reads one that says, "When you hear the carousel play, please come into the room." Hallie reads another that says, "Tomorrow the sun will shine on Rose Cottage." The two continue to find letters that relate to the playroom and Rose Cottage, but they can't understand what it all means. Hallie asks David if he is sure they are "playing a game" and who else is playing it with them. David replies, "She is."

Julia arrives at David's room, but the children are able to hide the letters just in time. She invites the two to go sailing with her tomorrow, but they say they have lessons to do and Maggie probably won't let them. Julia asks them if they have noticed anything different around the house, but the children say no. She then informs them there is about to be an eclipse and invites them watch it with her and Quentin, but the children don't seem very interested and insist they continue to "study." Julia sadly leaves, but says she will come back later to check up on them. David locks the door behind her.

Downstairs, Barnabas explains to Quentin that the first event of the destruction of Collinwood is about to happen when the eclipse occurs. He wants to take the children away, but Elizabeth doesn't want to frighten them because she is convinced nothing bad will happen at Collinwood for the remainder of 1970. This surprises Barnabas, but Quentin reveals that Elizabeth recently had her horoscope drawn.

Barnabas realizes that an "unfinished horoscope" was the second clue from Carolyn in 1995, but Quentin promises him that her horoscope was finished. Julia returns to the drawing room and mentions that the children are "acting weird" and she feels they are hiding something. Quentin decides to go upstairs to check on children, as Julia looks out the window and notices the eclipse is halfway complete.

Quentin arrives in David's room and finds him apparently sleeping. He tucks him in, but once he's gone, David gets out of bed and sneaks out. He meets Hallie in the hallway, who also mentions Quentin came to check on her. They head to the West Wing as the eclipse is nearing its completion. The two hear the playroom music, but it suddenly stops, signaling that the eclipse is complete. After nothing initially happens, the two decide to leave, but a door opens by itself and the children discover that the linen closet has turned into the playroom and is now fully accessible.

David: If only it wasn't so dark.

Quentin: (to Julia and Barnabas) I don't know whether to admire your tenacity or be exasperated by your stubbornness!
Julia: At the moment, I'll settle for sympathy for my stiff neck.

Julia: Barnabas, try to remember that the Collins family history is not particularly famous for its accuracy. 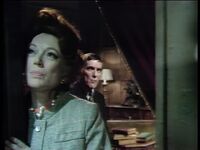 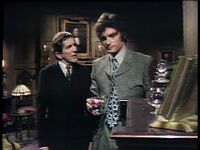 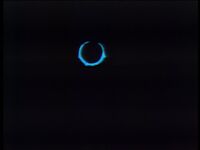 Eclipse
Add a photo to this gallery
Retrieved from "https://darkshadows.fandom.com/wiki/1075?oldid=142806"
Community content is available under CC-BY-SA unless otherwise noted.