The ghost of Daphne appears to Hallie in a dream and to David in the gazebo.

Collinwood, 1970. Julia and Barnabas have returned from the future with the knowledge that unless they can prevent it before the present year ends, David will be dead and the great house destroyed. This night, unknown to the adults, David has discovered a mysterious note, which tells him to come to the gazebo at midnight.

David goes to the gazebo at midnight and calls out for Hallie. At first she doesn't appear and David is about to leave. As he does, Hallie emerges from the trees, wearing the 19th century dress from David's dream.

Hallie, in a trance, initially walks past David without saying anything, but then comes to her senses and wonders what she is doing in the dress. David shows her the note he found at his door, but Hallie claims she didn't write it. He thinks she is playing a trick on him, which makes Hallie frustrated. Moments later, Hallie again feels like someone is watching them. She gets up and notices a strong scent of lilacs. David also can smell them and wants to stay to see if someone shows up, but Hallie panics and runs back to Collinwood.

In the drawing room, Carolyn is reading her horoscope in the newspaper, which says the next day she will have an "unexpected meeting." While they talk, Hallie quietly sneaks through the front door and runs upstairs to her room. Back downstairs, Elizabeth wonders why Carolyn has been acting so cynical lately. She says it's because she still misses Jeb.

Carolyn is surprised at Hallie for trying on an old-fashioned dress in the middle of the night. Hallie makes up a story where she found the dress in the attic and decided to try it on because she couldn't sleep. Carolyn is skeptical of her story, but Hallie only says she has merely been having trouble sleeping and still thinks of her parents' accident often. Carolyn accepts her story and eventually leaves, and Hallie wonders to herself why she didn't tell Carolyn the truth.

Meanwhile, David is still sitting in the gazebo, waiting for someone to appear to him.

Back in Hallie's room, Hallie falls asleep and has a dream where her bedroom door mysteriously opens. David walks in, wearing 19th century clothing, and Daphne follows him into her room. Hallie asks who the woman is, but David doesn't say anything, and Hallie screams as Daphne approaches her.

At the gazebo, David gives up and decides to head back to Collinwood, but as he leaves, he notices the smell of lilacs. Daphne appears to him, but then disappears seconds later.

Hallie is laying awake in her bed, disturbed from the dream she just had. David walks in and tells her he saw a woman with dark hair and wearing an old-fashioned dress near the gazebo. Hallie appears to be unsurprised and David wonders why, but before Hallie can respond, Elizabeth walks in and demands to know why David is still awake. He makes up a story that he was simply making plans for the next day with Hallie and quickly runs off. Elizabeth apologizes for David's behavior and kisses Hallie goodnight.

Downstairs, Carolyn tells Elizabeth that she saw Hallie wearing an old-fashioned dress. Carolyn wonders if they should tell Barnabas, considering the impending disaster revolves around David and Hallie, but Elizabeth doesn't see what wearing an old dress would have to do with anything. Soon there is a knock at the front door. Carolyn opens the door and sees Mr. Shaw.

Carolyn screams and thinks Jeb has returned, but Elizabeth walks up and explains that his name is Sebastian Shaw, a new astrologer living in Collinsport. Carolyn nearly has a breakdown and runs up to her room, while Elizabeth apologizes. Sebastian tells Elizabeth he has completed her horoscope though the end of 1970. Elizabeth quickly asks him if there is tragedy coming to the family. Sebastian momentarily hesitates, but he says the family will survive the year. She writes him a check and he leaves.

In Hallie's room, the children are going through several old notes David found in the attic, many of which are dated 1840. Hallie finds a note whose handwriting looks strikingly like her own, and David finds one similar to his as well. David discovers one of the notes regards a playroom, but quickly points out there is no playroom at Collinwood. He suggests they go searching through the closed-off areas of the house to find clues.

The children enter the West Wing and find a portrait of someone named Abner Collins. Next to his portrait, they find the door to what would be the playroom, but the discover the linen closet instead. Moments later, they hear the playroom music coming from behind the wall and Hallie smells the lilacs again. Daphne appears in the hallway, and the children run off.

Elizabeth: (to Sebastian) You're a very strange young man. 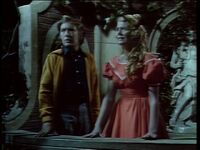 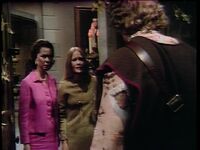 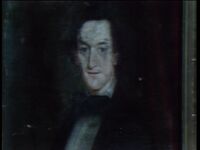 Abner Collins
Add a photo to this gallery
Retrieved from "https://darkshadows.fandom.com/wiki/1074?oldid=142804"
Community content is available under CC-BY-SA unless otherwise noted.