Elizabeth commissions Sebastian to do her horoscope.

Barnabas and Julia Hoffman have returned to their own time. Back from their terrifying trip to 1995, but back with the knowledge that before 1970 ends, there will be a catastrophe, which will end the Collins family forever. But they can find only one sign that the tragedy is to happen, and that is the presence in the house of a young girl. A girl who in 1995 was a ghost.

Hallie wonders where the dress came from, and momentarily falls into a trance and says to herself that the dress is hers. She quickly regains her senses and wonders why she would think that. A sudden chill comes into the room. There is a knock at the door, and Maggie wants to come in.

Hallie quickly pulls the sheets over the dress before Maggie can see it. Maggie wonders why she is still up and nearly pulls the covers off the bed, but Hallie stops her. The two begin talking about Hallie's well-being. Hallie admits she has had some trouble adjusting to life at Collinwood, but overall she is doing fine. After Maggie leaves, Hallie starts to chase after her to tell her about the dress, but she stops, and calmly puts the dress in a closet.

Downstairs, Elizabeth tells Maggie about Barnabas' theory that a great tragedy is coming. Maggie isn't sure what to think, but Elizabeth appears to believe him. After Maggie leaves, Elizabeth pulls a business card out of her purse and phones someone named "Mr. Shaw." They agree to meet the next day at 3pm. On the other end of the phone, Mr. Shaw hangs up and says to himself, "She is coming."

The next day, Hallie is still examining the dress before David barges in, much to the disgust of Hallie. David tells her he had a dream of her wearing an old-fashioned dress. Hallie is intrigued and asks for details about the dress. As David describes his dream and the dress, she becomes aware that he is referring to the same dress she is trying to hide from everyone. Hallie suddenly gets upset with David, thinking he is playing a trick on her. David, confused, leaves her room.

That afternoon, Elizabeth arrives at Mr. Shaw's house. She is startled at his strong resemblance to Jeb. Mr. Shaw is apparently an astrologist, and Elizabeth has come to have her horoscope read. Suddenly, he asks her why she is "so afraid," and what is going to happen at Collinwood "this year."

Elizabeth begs Mr. Shaw to draw up her horoscope, because she must know what is going to happen before the end of 1970. He instructs her to let him know the exact time when she was born, and he will draw up a day-to-day horoscope for the rest of 1970. She agrees to let him know about her birth when she finds out.

Meanwhile, David and Hallie are at the gazebo. Hallie asks David about the dream again. As they talk, Hallie becomes frightened once again and is convinced that someone is watching them.

David thinks Hallie is going crazy, but Hallie, still frightened, flees back to her bedroom.

In the drawing room, Maggie and Elizabeth continue to discuss Barnabas and Julia's trip to the future, and how they saw David's grave in the future. As David eavesdrops, he decides to walk in when they mention his name. David asks why they are talking about him, but Elizabeth dismisses his questions. David tells her he is tired of being treated like a small boy and storms out. As David returns to his room, he finds a note outside his door, asking him to sneak out and go to the gazebo at midnight.

At midnight, David goes to the gazebo and calls out for Hallie. She soon appears, wearing the dress from David's dream.

David: I had a dream last night.
Hallie: Big deal.
David: About you.
Hallie: Lots of boys have dreams about me.
David: Yeah. But they don't try and go back to sleep afterwards.

Sebastian: You know, I read somewhere that there are only 12 different types of faces in the world and yet we're constantly amazed at people who look alike.

Elizabeth: It's inconceivable to me, despite all of Eliot Stokes's theories. Time has simply been the day I'm living. Now to find out that there are different times...that a past and a future do exist somewhere.

Elizabeth: There's no telling what's going to happen, is there?
Maggie: No. Not even the computers can figure that out yet.

Hallie: Oh, David, you'll never understand women.
David: You can be sure of that. 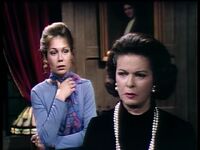 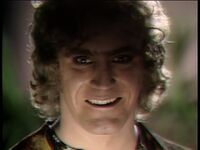 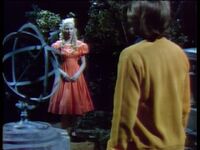 Dress Up
Community content is available under CC-BY-SA unless otherwise noted.