David dreams of a carousel music box. A dress from his dream appears in Hallie's room.

The great house at Collinwood in present time. A time which appears to be tranquil and serene. But on this night, Barnabas Collins and Julia Hoffman return from a frightening experience in the future, in the year 1995, to warn everyone of an impending catastrophe. How they returned remains a mystery. Barnabas has told of coming back through a children's playroom in the West Wing. But just moments ago, Quentin took Barnabas to the West Wing and proved to him that the door he thought led to the playroom actually led to a linen closet. But after they left, something very strange began to happen.

After Barnabas and Quentin exit the West Wing, the sound of the playroom music begins to play. Barnabas returns to the foyer and ponders what he just saw. He contemplates trying to contact the spirit of Daphne, but he then hears the sound of a woman crying coming from the drawing room.

Barnabas enters the room to find Carolyn sobbing at the fireplace. She confesses to Barnabas that she is still heartbroken over the death of her husband, Jeb, and fears she will never be able to move on. Carolyn asks many questions about Parallel Time, and if there was someone like Jeb there. Barnabas says there was no one named Jeb, but someone named Cyrus who was similar to him. He quickly changes the subject and asks her if she has ever heard of a place called Rose Cottage, and if "the night of the sun and the moon" means anything to her. Carolyn says she has never heard of a place near Collinwood by that name, but is confused about his other question and says it sounds like it's a riddle. Barnabas tells her that's exactly what it is, and they need to figure it out before it's too late.

Upstairs, Hallie sneaks out of her room to visit David. She is still on edge over what Barnabas and Julia told Elizabeth and Quentin about the impending disaster at Collinwood, and tells David she overheard them talking about it. Hallie has a strange feeling that someone is watching them. Barnabas enters the room and asks who she thinks is watching them.

Barnabas asks Hallie many questions about her emotions, but she is evasive and asks to be excused. Before Barnabas heads back downstairs, he asks David if he's ever heard of Rose Cottage. Like Carolyn, David is unable to provide any information.

Later, Stokes arrives at Collinwood and greets Barnabas. Barnabas tells him that Stokes' counterpart in Parallel Time almost cost him his life, and Stokes is fascinated by Barnabas' story.

Carolyn takes Hallie upstairs and is about to yell at her and David for being up so late, but soon the sound of wind rushes through the room. Hallie and Carolyn are convinced that someone else is in the room.

The sound of wind soon goes away, much to the relief of Carolyn and Hallie. But Hallie remains frightened and is convinced there is a spirit in the house.

In the drawing room, Barnabas concludes his story of Parallel Time and his trip to the future. Barnabas tells Stokes that the Stokes in 1995 said he was in Europe in 1970 when the disaster happened, but Stokes says he has no plans to go to Europe. He agrees with Barnabas that a disaster is coming.

Stokes promises to keep in touch with Barnabas as time goes on, and leaves Collinwood for the night. Carolyn comes down to the foyer and tells Barnabas what happened in David's room, and that she had the feeling they were all being watched. She figures she is merely stressed out, but Barnabas is visibly concerned.

In the middle of the night, David has a dream where he sees the carousel from the playroom on the table in the foyer. He goes to inspect the carousel, but Hallie shows up, wearing an old-fashioned dress from the 19th century. She begins to dance to the music and she disappears in the drawing room. He returns to the foyer and finds the carousel is missing.

Meanwhile, Carolyn catches Hallie walking through the halls of Collinwood. She sends her back to her room, and when she arrives, she finds the dress from David's dream on her bed. 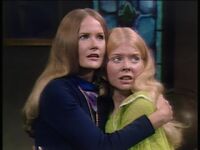 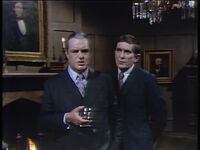 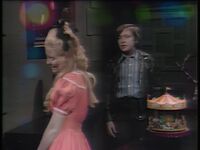