Upon returning to 1970, Barnabas and Julia learn that the playroom at Collinwood in 1995 does not seem to exist.

The great house at Collinwood in the year 1995. After escaping from Parallel Time, Barnabas Collins and Julia Hoffman discovered a Collinwood in ruins, a result of some mysterious disaster which occurred in 1970. The spirit of the evil man who reigns over the ruined house has possessed Julia Hoffman and forced her to betray Barnabas Collins' secret to the local authorities. But Barnabas has rescued Julia, and now the two are looking for a way out of the house, and hopefully, out of this time.

Barnabas helps a weakened Julia up a mysterious staircase. When they emerge at the other end, they discover they have returned to 1970. A girl who looks similar to Carrie appears and asks who they are and what's wrong.

Barnabas thanks the girl for her help, but she is very confused and goes to get Elizabeth. Julia asks the girl what year it is, which makes even more confused, but she finally tells them it's 1970. She introduces herself as Hallie Stokes, the niece of Professor Stokes, who has been living at Collinwood since her parents were killed in a car accident. Hallie informs them that Roger is in Europe on a business trip, but Elizabeth is still in the house.

Elizabeth is reading in the drawing room and Quentin rushes in. He has just returned from the East Wing, where he saw the room was filled with smoke and saw a young woman (Roxanne) wandering around, calling for Barnabas. Quentin concludes they will never see them again. At that moment, Barnabas and Julia enter the drawing room.

Barnabas explains the fire that destroyed the parallel Collinwood and Quentin remarks that he just saw the East Wing room change moments ago and it was filled with smoke. This revelation shocks Barnabas, because he says the fire happened well over a week ago. Quentin wonders where they have been, and Barnabas reveals that they were transported to 1995, where the house was in ruins and a disaster is coming. Barnabas isn't sure when or how it will happen, and Quentin and Elizabeth are both unsure if they believe their claims. Julia reveals that Carolyn was the only who knew what happened and asks Elizabeth if there is a place near the estate called Rose Cottage. Elizabeth says she has never heard of it. Quentin wonders if Barnabas just imagined it, but Barnabas believes everything in 1995 did happen and they must prepare. Hallie eavesdrops outside and has heard everything.

Later that night, Barnabas and Julia are going through family history books from the early 19th century. Barnabas wonders if they did the right thing by telling Elizabeth and Quentin of the impending disaster, but Julia feels they must know all the details. Julia admits to Barnabas she can still feel the sense of evil from Gerard's presence. As Julia recalls their time in the future, Barnabas discovers Daphne's name in one of the books. Her name was Daphne Harridge, and she was the governess at Collinwood in the year 1840. Barnabas decides to go to the graveyard to see if he can find any more clues there.

Later, Hallie goes to visit Quentin in his room. She is visibly frightened and asks if Barnabas and Julia are "good people." As they talk, Hallie tells him she found them in the West Wing, which confuses Quentin because the Parallel Time room is in the East Wing. Hallie tells Quentin she was "drawn" to the West Wing and wasn't sure why.

At the graveyard, Barnabas and Julia find Daphne's grave, which says she was born in 1818 and died in 1841. Julia concludes she did not die a natural death because her spirit is not at rest. Next to her grave, they find the grave of Gerard Stiles, who also died in 1841, and the tombstone reads "In darkness he did live and die."

Barnabas returns to Collinwood and goes to visit Quentin. Quentin is still confused as to why he and Julia were discovered in the West Wing, instead of the other side of the house. Barnabas mentions the playroom was the last room they were in before they returned to 1970, and then they walked up a very strange staircase. Quentin tells Barnabas there is no such thing as a playroom in the house, but Barnabas says he will show him.

Barnabas takes Quentin to the West Wing and opens the door to the playroom, but they discover the room is currently a linen closet.

Dark Shadows Every Day - Episode 1071 - Back From the Future 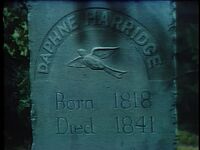 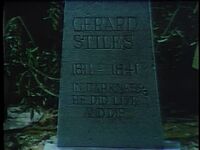 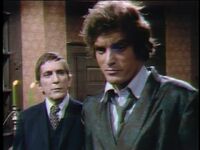 Barnabas & Quentin
Add a photo to this gallery
Retrieved from "https://darkshadows.fandom.com/wiki/1071?oldid=142218"
Community content is available under CC-BY-SA unless otherwise noted.