Collinwood in the year 1995. Barnabas Collins has escaped from Parallel Time only to find himself in even greater peril, for the great mansion is ruined, deserted. Ruled by a ghost who has even managed, without Barnabas even knowing it, to turn Julia Hoffman against her friend. And in the coffin room of the Old House, dusk comes, and with it a new enemy.

In the Old House cellar, Barnabas opens the lid to his coffin as the sheriff shoves a cross in his face. Barnabas screams.

As the sheriff holds the cross and a gun to Barnabas' face and Barnabas calls to Julia, the young girl who danced with David/Tad appears and frightens the sheriff, who lets down his guard long enough to allow Barnabas to capture him.

Upstairs, Julia weeps to Gerard over her betrayal of Barnabas, asking him why he is forcing her to be there, to hear the silver bullet kill Barnabas. A shot is heard, and she crosses the room to see Barnabas standing there. Barnabas tells her the sheriff is dead and that his gun was loaded with silver bullets. Barnabas tells Julia that Carrie saved him and that they must gather as much information as possible and return to 1970 as soon as possible because the police now know about him. When Barnabas says he doesn't know how the police found out, Julia breaks down and confesses.

Barnabas is incredulous when Julia tells him she betrayed him and will do so over and over again. She says he is not safe around her and should just go without telling her what he is planning. Barnabas asks Julia who made her betray him, but she tells him she can't say. She advises Barnabas to return to Angelique's room and hope he can get back to Parallel Time or 1970, and if he doesn't, then she will probably be forced to destroy him. Barnabas guesses that Gerard has her under his power, but Julia denies it weakly. Barnabas asks what Gerard has done to her, why he frightens her so much that she cannot even speak his name. Julia tells him that "he" is outside watching. Barnabas announces that there will be a showdown, a battle of wills. Barnabas uses his powers to force Julia to look at him, but he breaks down and tells her he cannot go anywhere without her. Julia is frightened because she believes Gerard is stronger than Barnabas, but Barnabas tells her that once they are back in 1970, Gerard will have no influence over her. Barnabas embraces Julia, and she breaks down crying over her betrayal and her certain knowledge that it will happen again. Barnabas pledges not to leave Julia alone for even one moment, and that they must find their way to their own time before the night is over. Barnabas plans to call Stokes, but Julia believes the best bet for escape is Angelique's room. They leave to find Stokes, together, as Gerard watches them.

Back at the Old House, Stokes tells Barnabas and Julia that he is shocked at the Sheriff's death and the problems it poses. He tells Julia that he once saw Gerard and does not envy her. He says other ghosts have been seen, but he has not seen any of them. Stokes is terrified of being implicated in the Sheriff's death and tells Barnabas that he is too old to help him. He advises Barnabas to find a way for he and Julia to return to their own time, but Barnabas refuses to try without finding out what Carolyn's note meant. Barnabas suggest a séance to contact Carolyn.

Stokes says he will not participate in the séance and asks Julia if she really believes Gerard will allow her to participate. He even suggests that Gerard may be able to prevent Carolyn's spirit from returning, or he may prevent them from being able to understand her. Barnabas instructs Julia to set up the table for the séance and tells Stokes he has already considered his objections. Barnabas reminds Stokes how he was 25 years ago and says that if they can return they can prevent David's death, they can stop Quentin and Carolyn from going insane, and let everyone live out their lives without Gerard's influence. After they sit at the table, Julia wonders if she should participate, but Barnabas tells her she is needed as Carolyn is most likely to speak through her. Barnabas calls on Carolyn's spirit and Julia begins to speak in a girl's voice and confirms that she is Carolyn.

Carolyn (through Julia) reiterates the six clues in a different order than they appeared on the note. When Barnabas asks about Rose Cottage, a wind comes through and blows out the candle. Julia screams that Gerard is coming to kill Barnabas and when Barnabas goes to her, Stokes walks to the window where Gerard is watching. Gerard motions to Stokes who goes over to the desk and sits down. Barnabas sees Gerard and when he goes to Stokes, he is dead. Julia starts screaming hysterically. When Barnabas looks up, Julia has run out of the house. Barnabas stands at the door in indecision, whether to stay with Stokes or go to Julia.

Meanwhile, in the playroom, Gerard holds a blood-stained dagger, which he gives to Julia when she enters the room. She asks "Must I?" and he nods. Julia takes the dagger and prepares to kill herself, but Barnabas shows up and orders her to put down the knife. Barnabas tells Gerard she will come with him, but Gerard reaches out and touches Julia on the forehead, and she collapses. While Barnabas examines her, believing her to be dying, Gerard leaves and locks them in the playroom. Barnabas tries the door, and then turns to see Carrie, who proceeds to walk through a wall. Barnabas and Julia watch in amazement as a door appears in the wall exactly where the ghost had disappeared. Barnabas then opens the door and reveals a staircase. Barnabas helps a weakened Julia to the ascend the stairs, and when they get to the top and exit into a corridor, Barnabas realizes they are back in 1970. Julia collapses in a chair. Then they hear a voice and turn to see a girl who looks like Carrie, asking who they are and what is wrong.

Barnabas: Oh, Julia, who's saved me so often, what has he done to you?

Barnabas: I will not leave you for one moment this night before dawn. Because before dawn we must get back to where we came from!

Professor Stokes: I'm too old a man for this! Too old and too frightened. There, I've said it. If you have any way of getting back to your own time, in the name of heaven use it.

Julia: You can't take me with you.
Barnabas: Never without you. 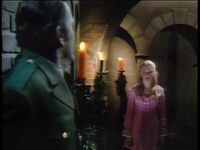 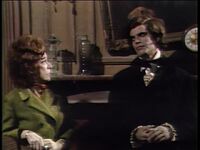 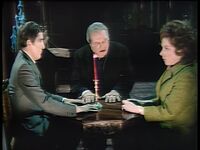 Seance
Add a photo to this gallery
Retrieved from "https://darkshadows.fandom.com/wiki/1070?oldid=142793"
Community content is available under CC-BY-SA unless otherwise noted.