Barnabas discovers a note containing six clues as to the destruction of Collinwood.

Collinwood in 1995, a ruined, deserted house where Julia and Barnabas cannot discover what catastrophe occurred in 1970 and destroyed the Collins family. But this night, there is hope that they will finally uncover the secret, for a mad Carolyn has sent Barnabas a note telling him to meet her in Collinwood, because she remembers what actually happened.

At Collinwood, Julia tells Barnabas that nothing good ever happens when they are there and Barnabas asks why she is against the trip. Julia says she believes it is a trap and is too afraid to go into the drawing room. Barnabas goes alone where he sees Carolyn sitting at the desk in the middle of writing something. When he touches her, she falls to the floor, dead.

Barnabas calls to Julia, but Gerard appears and motions her to ignore him. Barnabas tells Julia she must examine the body, but Julia is disoriented and she seems to not understand. When Barnabas brings Julia to the drawing room, Carolyn's body has disappeared, but the note she left is still there. Barnabas reads the note which details six events which herald the Destruction of Collinwood: The night of the sun and the moon, the night Rose Cottage was destroyed, an unfinished horoscope, the night I sang my song, picnic, and murder. Julia tries to remind Barnabas that Carolyn was mad. Barnabas instructs Julia to call the Sheriff, but Julia reminds him that they were not supposed to be in the house. Barnabas counters by reminding her that they have a note from Carolyn telling them to come meet her. In the foyer, Barnabas confronts Julia with her contrary behavior, asking what is wrong with her that she doesn't want to do anything he says. She reluctantly agrees to get the Sheriff and he says he will be searching the house for Carolyn's body. Julia tells Barnabas to be "very" careful as Gerard watches from the top of the stairs.

Now alone in the ruins of Collinwood, Barnabas wonders why "he" would have hidden Carolyn's body and if he can save her from dying if he returns to 1970. He decides to try the secret panel in the drawing room, but Gerard shows up right before he enters. He yells at Gerard to let him at least bury Carolyn as Julia returns, without the Sheriff. Barnabas informs Julia he saw the spirit and that he intends to keep Carolyn's body. Julia asks why the spirit did not harm him, and Barnabas assumes it is because he can't. Barnabas says he is going to search upstairs and for Julia to bring the Sheriff. Julia says she doesn't know how she can face Carolyn if they get back to 1970, knowing what she does now. When Barnabas leaves, Julia calls out to Gerard by name, wondering why he had to kill Carolyn.

Upstairs, Barnabas is trying to get into the locked playroom when Julia arrives with the Sheriff. When the Sheriff tries the door, it is unlocked, which makes the Sheriff wonder about Barnabas. When they walk into the room, Carolyn's body is laid out on the table, holding a flower.

The Sheriff looks at Carolyn, remembering how she looked before the catastrophe. Barnabas asks the Sheriff what he knows of the events and theorizes that whatever happened is still happening, and caused Carolyn's death. Barnabas asks if the Sheriff has heard of Gerard, but he has not. Barnabas explains that Gerard is a spirit, capable of materializing and dematerializing and killing. The Sheriff wants to have Carolyn's body examined to determine how she died. Barnabas announces that he is going to have the house exorcised, which frightens Julia. Barnabas says he is going to have Stokes do it, and the Sheriff does not object. Barnabas tells Julia they are going to find Stokes, but Julia defiantly announces she is going to stay with the body and no one can change her mind. The Sheriff thinks Julia is crazy for wanting to stay in the house alone. Once Barnabas and the Sheriff are gone, Gerard steps out of the shadows. Julia begs Gerard to leave, but he looks at her, and after a while, she asks him what she must do.

At the Old House the next morning, the Sheriff tells Quentin that Carolyn died of heart failure and Quentin, disbelieving, says that "Barnabas made him do it." When asked to explain, Quentin says that Barnabas made Carolyn go there because "he wasn't satisfied. He had to find out for himself." Then Quentin clams up when he realizes that he has told the Sheriff to much, saying "He'll kill me!" and that he doesn't know Gerard. The Sheriff tries to get more answers, but Quentin has completely lost his mind at this point. When Julia arrives, she immediately wants to give Quentin a sedative, and the Sheriff obligingly helps her. Julia explains that Quentin has been at Stormcrest Sanitarium for quite a while, and Quentin asks if he can go back there, just to get away from Collinwood. The Sheriff asks why Julia did not tell Quentin about Carolyn's death and she says she went to Findley's Cove and has not been back until now. The Sheriff demands to know where Barnabas is and Julia looks away and sees Gerard standing outside the window. She tells the Sheriff that after he takes Quentin to Stormcrest, to come back, just before dusk, and she will help him.

That evening, Barnabas opens the lid to his coffin as the Sheriff shoves a cross in his face. Barnabas screams for help.

Julia: Gerard? Did you have to kill her? Did you? Gerard!

Sheriff: You could help me if you wanted to!
Julia: (Looking to the window, where Gerard is standing) Could I?.

Sheriff: I know all about you Barnabas Collins! 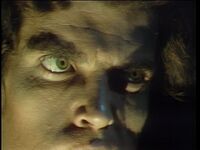 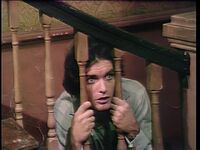 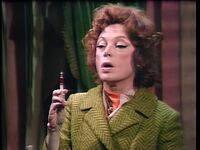 On Call
Add a photo to this gallery
Retrieved from "https://darkshadows.fandom.com/wiki/1069?oldid=142216"
Community content is available under CC-BY-SA unless otherwise noted.