Julia falls under the control of Gerard's ghost.

The year 1995 and Collinwood is abandoned and in ruins, with Carolyn and Quentin both gone mad. This is what Barnabas Collins and Julia Hoffman find when the disturbance in time brings them to this year after their escape from the parallel band. To their amazement, they have seen the ghosts of David and a strange young girl, and have discovered that the spirit that rules Collinwood is a ghost whose mere presence corrupts the surrounding air.

Julia enters the playroom, looking for the young girl, but she has vanished. The door slams and Julia is trapped. When she looks behind her, she sees Gerard staring at her.

Julia tries to talk to Gerard, but then decides she doesn't want him to come any closer, so he does. She begs him to stop looking at her, but he continues.

Meanwhile, Barnabas awakens in the basement of the Old House. He heads upstairs, calling for Julia, but finds Stokes instead, who got there just before dusk and fell asleep waiting. Stokes asks where Barnabas was, and he makes up a story explaining why he was in the basement. Stokes tells Barnabas that he tried to revive Carolyn's memory of "the night in question", but had no real luck. Barnabas tells Stokes that there are two ghosts in addition to the evil spirit, and goes on to tell him about them.

Back at Collinwood, Julia is headed downstairs, evidently under the control of Gerard. She leaves Collinwood in a zombie-like trance.

Barnabas tells Stokes about the ghosts of David (who is really Tad) and the young girl, but Stokes knows nothing about the girl. Barnabas asks Stokes if he knows the names Tad and Carrie, then tells him about the birthday card they found. Stokes does not recall any children by that name. Barnabas tells Stokes that Quentin believed David was actually Tad, and that he mentioned a woman named Daphne. Stokes begins to panic, asking if Barnabas spoke to Quentin, at which point Quentin arrives and tries to strangle Stokes. It seems Quentin blames Stokes for the destruction of Collinwood because of his failed exorcism, which failed to rid Collinwood of its ghost, and raised "his" wrath. He says that if Stokes had not angered "him" that nothing would have happened. Stokes flees as Barnabas holds Quentin back. Barnabas tries to calm Quentin when Julia returns. Barnabas explains the situation and the accusation against Stokes. Julia goes to get a sedative for Quentin, still in a trance.

Barnabas tells Julia he wants to perform a new exorcism, but Julia tells him the spirit is too strong. Barnabas asks how she knows this about him. Julia, flustered, tells him she felt how strong he was, and tried to explain that before. Barnabas wonders if they left if Carolyn would recover and everything would work out, but Julia doubts this also. Julia tells Barnabas she has something to tell him, but as she does, she sees Gerard standing outside the window. She makes up a story about feeling a presence in the Old House, but then says it was not important. Barnabas tells her to be careful, especially during the day when he is not there to protect her, then asks where she was at sundown. Julia tells him she was just "out for a walk." She denies going to Collinwood. Barnabas hears a noise upstairs and goes to investigate, while Julia writes a note and sneaks out. Barnabas returns with Quentin, who feels sick after taking the sedative. Barnabas finds the note and wonders where she has gone.

Julia returns to the playroom, calling to someone. A woman then appears.

Gerard shows up and the woman disappears. Julia tells him she saw the figure of a woman there, and can smell the scent of lilacs. Julia asks Gerard who it was, and why he sent for her, but he just scowls at her. She assures him she will not tell Barnabas.

Back at the Old House, Stokes returns after Quentin is safely asleep. Stokes tries to convince Barnabas that Quentin should be sent back to the institution, but Barnabas believes he can cure Quentin by holding another exorcism.

Back at the playroom, Julia tells Gerard she "knows what he wants," and agrees to it.

Stokes tries to convince Barnabas to forget the exorcism, but agrees to help if he and Julia decide to do it. Stokes sees Julia in the woods (and Gerard behind her) and asks who he saw her with. He offers to walk Julia back to the Old House, but she says she will be fine. After she leaves, Stokes thinks to himself that he is certain someone was there.

Julia returns and tells Barnabas she just needed some air. She changes the subject to Quentin, whom she goes to look at, after agreeing to help with the new exorcism. Julia abandons her trip to see Quentin to suggest to Barnabas they leave and try to get back to 1970. Barnabas asks what happened to her when she "went out for air," because it is not like her to not try and help others. Julia "changes her mind" and decides to stay and live with what happens. Julia heads upstairs, after which Barnabas smells lilacs and turns to see the woman Julia saw in the playroom materialize partially. Suddenly, thunder cracks and a wind blows out all the candles and she disappears. Barnabas calls out to her, but she is gone, leaving only an aged note which says, "She will die!"

Julia: (to Professor Stokes) I'm afraid Collinwood works on all our imaginations.

Quentin: The only sedative I need is to get my hands around Stokes's neck. I'll be calm for the rest of my life. 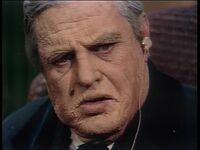 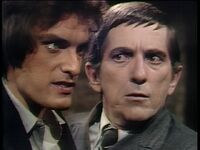 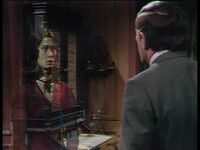 Daphne's Ghost
Add a photo to this gallery
Retrieved from "https://darkshadows.fandom.com/wiki/1067?oldid=142770"
Community content is available under CC-BY-SA unless otherwise noted.