Julia follows a ghost of a young girl to the playroom.

The great house of Collinwood in the year 1995. For reasons that are still a mystery to them, Barnabas and Julia have found themselves projected into the future after their escape from Parallel Time. And in the future they have come to, Collinwood is in ruins and most of the family has disappeared. On this night, Barnabas and Julia have found a half-mad Quentin, who remembers nothing of what happened to the house and to the family. They decide to take Quentin to a strange children's playroom that exists in 1995, but did not exist in 1970, for Barnabas believes that the playroom may hold the key to the mystery.

Quentin, followed by Barnabas and Julia, hear the music outside the playroom and Quentin suddenly gets cold feet. The music stops as Quentin opens the door. He looks inside, screams and runs away. Barnabas and Julia go inside and see David, just as he was in 1970.

Barnabas tries to talk to David, but he does not appear to recognize them. He turns and walks away, disappearing into a wall. They discuss that the ghost did not appear to recognize them at all and Barnabas becomes convinced that the playroom is the key to the mystery since it did not exist in 1970, and that Quentin knows more than he is telling. They go to look for Quentin. Downstairs, Quentin discovers the front door is locked and he can't escape. He goes into the drawing room where something crashes to the floor. He yells at the wind to leave him alone and pleads with an unseen force. He promises to never return if it will let him go, then runs to the front door again, but it is still locked. The wind stops and he goes back to the foyer, looks upstairs, and sees Gerard standing there, scowling at him. Quentin cowers as the ghost approaches, retreating to the drawing room and falling down. A figure approaches, but it is just Barnabas, with Julia in tow. Quentin says there is no way out and "he" has them trapped and is going to kill them. Barnabas asks who and Quentin tells him "he" is on the landing, but Barnabas says he and Julia saw no one and goes to investigate. Barnabas goes upstairs, but finds nothing, then opens the door effortlessly. Quentin bolts, refusing a sedative from Julia. As he leaves, Julia tells Barnabas she feels "the presence of evil". They leave as Gerard watches from the landing.

Outside, Julia points to the gazebo where she sees David and a young girl.

Satisfied they have not been seen, Julia and Barnabas move to where they can spy on the children better. The music begins and the children, dressed in nice clothes from 1970, begin dancing a minuet. Barnabas and Julia are puzzled by the children dancing such an old-fashioned dance. When they finish dancing, the children kiss briefly and walk away, fading out. Barnabas and Julia puzzle over the girl, whom they have never seen before. Julia reasons she must have arrived after they left. They plan to question Quentin about her. At the Old House, Quentin is talking to an unseen person when Barnabas and Julia arrive, asking why they never speak to him and the burden of guilt. He mentions her name, Daphne, begging her to appear.

Barnabas walks up to Quentin, who never noticed him. When Barnabas asks about Daphne, Quentin swears he will tell them nothing. Barnabas asks if she is the girl they heard speaking to David, but Quentin tells him David is dead. Barnabas tells him he saw David in the playroom earlier, but Quentin tells him he didn't see David, he saw Tad. Julia recalls that Tad was the person the birthday card was written to. Barnabas tells Quentin it had to be David and asks why he thinks it was Tad, but Quentin again refuses to say anything else. Quentin grabs Barnabas by the collar and threatens him, but when Barnabas fixes Quentin with his gaze, Quentin seems to remember that he can't beat Barnabas. Quentin lets go of Barnabas, looking defeated. Julia tells Quentin to go upstairs and get some rest, but he says there is no rest now. Julia points out that it will be dawn soon and Barnabas laments over another day where every answer brings with it more questions, including three meaningless names. Julia tells him the names will mean something in time. Barnabas heads to the basement.

That morning, Quentin comes downstairs, waking Julia, who is guarding Barnabas. He asks Julia why the attic room is locked and she tells him it is to protect his portrait. He asks where Barnabas is and Julia reminds him that he knows Barnabas can't come out during the daylight, but Quentin does not know what she means. As he leaves the room, Julia ponders the information she has just received, then she turns around and sees the young girl standing outside the window. She leads Julia back to the playroom at Collinwood. Julia enters the room and searches for her, but she has vanished. The door closes and Julia is trapped. She turns around and sees Gerard staring at her.

Quentin: Barnabas, why are you trying to confuse me?
Julia: You must know who you saw.
Quentin: I did not see David in the playroom. It was Tad; it was Tad that I saw!

Quentin: (shouting) Now, get out of my sight before I...
Barnabas: (in an even voice) Before you what? I suggest you get a hold of yourself. 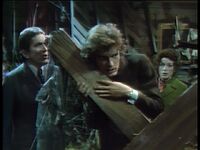 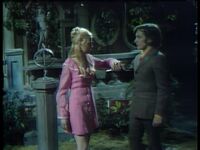 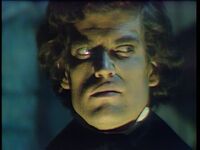 Gerard Stiles
Add a photo to this gallery
Retrieved from "https://darkshadows.fandom.com/wiki/1066?oldid=145172"
Community content is available under CC-BY-SA unless otherwise noted.