Professor Stokes reveals that both Carolyn and Quentin are insane; Barnabas and Julia see the ghost of David Collins.

Collinwood in the year 1995, where Barnabas and Julia, escaping from Parallel Time, have found themselves in the future. To their horror, they have discovered the great house in ruins and the family mysteriously vanished without a trace. The few people they have met have been unable or unwilling to tell them what happened. They know only that the catastrophe, whatever it was, occurred in the year 1970. Carolyn, alone, remains, but she has gone mad and cannot or will not reveal the truth.

Carolyn enters the playroom, unaware that she is being followed by Barnabas and Julia. Barnabas notes he has never seen the room as Julia hears the music and Carolyn giggling and talking to someone as he opens the door.

Barnabas and Julia enter the playroom, which is in perfect condition unlike the rest of the house, just in time to barely see two people vanish. They talk about the figures and the condition of the room, ignoring Carolyn, who keeps yelling at them to get out. They finally acknowledge her and tell her they are trying to help her, but she sulks in a chair and tells them they should go away. They try to question Carolyn, but she refuses to answer them directly. She finally says she was talking to herself. Julia tells her they want to help her. Carolyn asks how they found the room, and when Barnabas tells her they followed her, she says someone must be telling secrets. She shows them the door and tells them if they come back the Sheriff will arrest them for trespassing. They say they will be at the Old House. After they leave Carolyn resumes her conversation with someone named "Tad," but he is not there, which makes her cry. She goes back to sulking in the chair, lamenting over how Barnabas and Julia ruined a lovely party.

At his home, Stokes reads a letter telling him that Quentin has had a change in "his condition" and it is not for the better, when he gets a knock on his door from Julia and Barnabas. They barge in as he is telling them they should have taken his advice and left town. They tell him they just got back from Collinwood and he tells them they have to stop that, their lives are in danger. Julia tells him she knows that and they tell him about seeing a ghost there and about the statue attack on Julia. Stokes obviously knows who they are talking about, but he tells Barnabas that people see all kinds of things at Collinwood that may not exist. As they talk, Julia has been reading the letter about Quentin, which Stokes takes from her, but gives back at Barnabas' insistence. The letter says Quentin is in a mental institution, but Stokes is fixated on the fact he looks exactly the same as when he went in, back in 1970. Barnabas and Julia plan to go see him, but Stokes tells them he escaped yesterday and would not be able to help them. Barnabas grills him on why the big conspiracy exists and why he of all people is refusing to tell him anything. Stokes tells him he can't tell them much because he was in Europe when disaster struck Collinwood. He asked questions in the Fall of 1970 and even now is frustrated over not being able to find out anything since.

Stokes tells Julia he was terrified for their safety. When he first returned from Europe he attempted an exorcism to try and undo the disaster, but almost died when he saw the ghost and felt the overwhelming sense of evil. He never found out what happened to the rest of the family, except for Quentin, who was wandering in the woods incoherent; Carolyn was found cowering in the tower room, both having gone mad. He believes Carolyn is the only one who knows, but she has blocked out the memory. He tells Barnabas he will try to help them and they promise to keep in touch as they leave. After they are gone, Carolyn comes in, and begins yelling that he is the one who told them about the playroom. He denies this and asks Carolyn to sit down and do something for him.

Back at Collinwood, Julia and Barnabas return to the playroom and wonder why it is still lit and in use. Julia finds a brand new birthday card which reads: "Happy birthday to my dearest Tad from your loving Carrie."

Barnabas and Julia try to figure out what to do next. Barnabas believes Stokes was frightened and confused, but honest. He thinks finding Quentin is their best bet, but Julia feels that if Quentin was in a mental institution he will be little help. Barnabas reasons that the portrait of Quentin Collins must still exist somewhere. Just then, they hear a commotion from upstairs and go to follow it.

Back at Stokes' house, Carolyn laments that Tad will not have another birthday party for a year and fears she will not see him again until then. Stokes consoles her and asks her to try and remember what happened back "on that night in 1970." Carolyn responds that it isn't healthy to dwell on the past as she rummages through his things and tells him she may not be able to confide in him anymore since he has "new friends." He reminds Carolyn that Julia and Barnabas are her friends too, but she is still angry that they spoiled her party.

Meanwhile at the Old House, Barnabas and Julia discover Quentin's portrait in one of the abandoned bedrooms. As they gaze over it, Quentin runs in and attempts to slash it with a knife.

Quentin struggles, begging them to let him destroy the portrait. Quentin asks who they are, and does not believe it really could be Barnabas and Julia, saying "they went away a long time ago." Quentin seems to think it is the attendants at the institution playing tricks on him as they lead him away.

Stokes continues talking to Carolyn, saying she always says everyone will come back and if she believes that, she must know where they went. Stokes tells her that perhaps they have not come back because she has never remembered what happened back in 1970 when they left. Maybe if she could remember, things could change and they would return. Carolyn tells him that sometimes she almost remembers, but she can never put everything together.

Meanwhile, Quentin tells Barnabas and Julia he believes they are who they say they are, even though he doesn't know why they have not changed. He says he accepts anything except for his own innocence. He remembers that he came there to do something and seems to have failed, again. He says he needs to go and when Barnabas presses him for information he gets agitated, saying he doesn't want to think about that night. He says he should have prevented the disaster and deserves to die. Barnabas tells him he could not have prevented it because he was not there, then turns his attention to the playroom, asking how it got there. Quentin says he doesn't know anything about it and that Barnabas is mistaken about it not previously existing. Barnabas tries to get Quentin to take them there, but Quentin freezes up and Julia tells him it may not be wise to take him there. He agrees to be taken there, but tells them it will not help.

The three go to Collinwood and hear the music outside the playroom, which makes Quentin incredibly nervous. The music stops as Quentin opens the door. He looks inside, screams and runs away. Barnabas and Julia go inside and see David, just as he was in 1970.

Carolyn: I often talk to myself because I'm alone so much. I don't like being alone. I ask myself, "How long will it be before they all come back?"
Barnabas: Before who comes back?
Carolyn: Everyone? Do you know where they've gone?
Barnabas: Who are you talking about?
Carolyn: If you know, you mustn't keep it a secret from me! It isn't fair!

Stokes: I've always suspected that Carolyn was the only person who knows what really happened...but the secret is buried, perhaps forever, in the darkest corner of her mind. 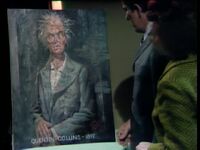 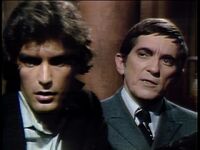 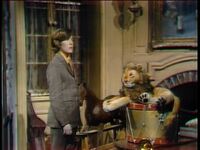 David's Ghost
Add a photo to this gallery
Retrieved from "https://darkshadows.fandom.com/wiki/1065?oldid=142754"
Community content is available under CC-BY-SA unless otherwise noted.