Barnabas and Julia follow Carolyn to the playroom in Collinwood where they hear music.

The year is 1995, and the great house of Collinwood still rises from the cliffs above the sea. But it is now deserted and in ruins. It is here, 25 years into the future, that Barnabas and Julia find themselves after their escape from Parallel Time, searching to discover the causes of the devastation around them.

Barnabas and Julia hear music and head into the foyer. Barnabas tells Julia to wait for him while he goes upstairs. Upstairs a bust comes loose and tumbles down, barely missing Julia. Julia remembers Jeanne Flagler and panics, running to the door where Barnabas leaves with her. Outside Julia begins muttering, "He meant to kill me!" and she sees the sneering face of Gerard Stiles.

Barnabas and Julia return to the Old House and discuss the face they saw at the window, noting he was wearing old-fashioned clothes, which allows Barnabas to conclude he is a ghost from the past. Julia is having a hard time calming down; she is very shaken by the face, saying he was the very essence of evil and that just by looking at her, he made her feel something inside her that was evil and could grow. Barnabas did not see the face, but he theorizes his non-human nature may give him some immunity to the powers of the ghost. Julia says he must be the force ruling Collinwood, but Barnabas wonders if there might be other forces at work there. Julia cannot imagine anything else surviving with the evil there. Barnabas suggests she rest while he goes to Carolyn to try to find out about the ghost, but Julia is afraid to stay alone and goes with him.

At Findley's Cove, Carolyn brushes her hair while Mrs. Johnson tries to tell her she should not go to Collinwood tonight because no one belongs there. Carolyn laughs and tells her she is wrong. Carolyn goes to the family photo album, saying she must go tonight because it is "his" birthday and she should bring "him" a present, but she has nothing to give him. Carolyn asks Mrs. Johnson who is getting the house ready for the return of the family, and gets upset when Mrs. Johnson tells her no one is ever coming back. Carolyn ignores her, saying they will celebrate with a picnic at the gazebo, and she will go sailing with David. Carolyn pulls out a photograph of Quentin and Maggie and freezes. Mrs. Johnson asks what is wrong, then snatches the photo put of Carolyn's hand, upset saying that was the first time they saw "him." Carolyn says she is wrong, but Mrs. Johnson points him out in the photograph. Carolyn grabs the photo, crying as she tears it to pieces.

Later at Findley's Cove, Carolyn is back to fixing her hair and ignoring Mrs. Johnson, who is imploring her to admit she saw Gerard then, and has seen him since, when they hear a knock on the door. When she asks who it is, Barnabas says it is he and Julia and asks if they can come in. Carolyn screams, "No! Go away!" but they barge in anyway and greet Mrs. Johnson. Mrs. Johnson tries to tell them it is no use talking to Carolyn, but Julia says someone at Collinwood just tried to kill her. Carolyn shouts at them and Julia describes Gerard, which visibly upsets Mrs. Johnson, but Carolyn smiles and says there is no one at Collinwood. Barnabas presses Mrs. Johnson for an answer as to who he is, but she runs out the door. Julia makes a half-hearted attempt to go after her, but returns while Carolyn returns to her task of actively ignoring her visitors, looking through some old jewelry. She tells Julia she never used to be so frivolous, then asks them again to leave because she is very busy. Julia presses on and says if they are nice, she will invite them to the picnic she is giving. Barnabas tells Julia they may as well leave, but tells Carolyn they will return. She tells them not to come back as she is far too busy for them. She shows her uninvited guests to the door, then goes back to laughing and opens a chest and pulls out her dress, remembering how much "he" loved it when she wore her party dress.

Mrs. Johnson is sneaking around the Old House in the dark before Barnabas and Julia return. She comes out of the shadows as Barnabas is lighting the candles, asking if Carolyn told them anything. She asks why they want to know what happened, given that they can't prevent it, so Julia tells her that they can prevent it. Mrs. Johnson says they must be mad as Carolyn, but Barnabas points out the fact they have not changed in 25 years and they both time traveled there and will fix everything when they get back to 1970. Mrs. Johnson tells them she wished she could have stopped the calamity, and wonders if they could stop it. She tells them it started one night when the house was so quiet she could hear the waves from inside. She was walking down the corridor outside a room the children called the playroom. Barnabas urges her to go on, but she turns and sees Gerard outside the window and panics, running from the house yelling "I won't tell!" Julia tells Barnabas "he" is here and they have to find Mrs. Johnson for her own safety. Gerard watches as they leave.

Mrs. Johnson stops in the woods to sit and rest, and Gerard's hand reaches out and touches her on the shoulder.

Barnabas and Julia search for Mrs. Johnson, but they come across her body, sitting lifeless against a tree, her eyes still open. They hear a sound and duck out of the way as Carolyn walks up and tells Mrs. Johnson she should not be there, and offers to take her home. Carolyn talks to her, starting to panic when Barnabas and Julia come out of hiding. Carolyn accuses them of killing Mrs. Johnson. Carolyn scampers off and Barnabas laments that they will never know what she had to tell them. Barnabas and Julia head to the Sheriff's office.

Back at Collinwood, Julia ponders the meaning of Mrs. Johnson's hint "The children's old room". They head up the stairs when Julia hears footsteps downstairs and they go to the drawing room. Behind the doors of the drawing room they see Carolyn come in and head up the staircase. They follow her up and Carolyn enters the playroom, which Barnabas does not remember seeing before. From inside they hear the strange music and the laughter of children. Barnabas turns the doorknob and prepares to enter the room.

Mrs. Johnson: (about Carolyn) It does no good to talk to her. I should know.

Carolyn: (about Collinwood) I can go there anytime I want! My mother was a Collins, and I'm a Collins too! Do I need to remind you that you are only a servant?!

Carolyn: (indignantly) There are no murderers at Collinwood. (screaming) There are only intruders who get whatever punishment they deserve!

Carolyn: No! Don't come and see me. I am far too busy to entertain. Besides, you're going to leave Collinsport for good, aren't you? (shouting) Well, you'd better! And don't say I didn't warn you! And don't come back here ever again! 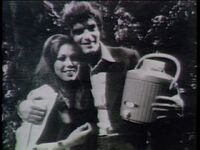 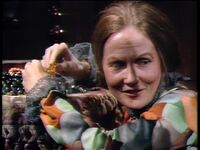 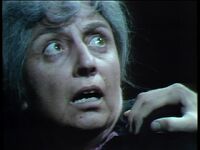 Fright
Add a photo to this gallery
Retrieved from "https://darkshadows.fandom.com/wiki/1064?oldid=143911"
Community content is available under CC-BY-SA unless otherwise noted.