The Sheriff urges Barnabas and Julia to leave Collinsport.

Collinwood in 1995 is a very different place than in 1970 as Julia and Barnabas have found out. For escaping from Parallel Time they find themselves in the future with Collinwood in ruins, the family seemingly gone with no record of where or why, and the three people they meet, Mrs. Johnson, Professor Stokes, and a mad Carolyn, refuse to tell them what has happened. And so they return to their hiding place.

Barnabas and Julia talk in front of the mausoleum, determined to find out what happened, but when they go inside, they discover the door to the secret room is open. They hear clicking on the steps and Carolyn emerges from the secret room, gloating that she knew they would return.

Barnabas and Julia purport they're there to write a book and need the dates of Naomi's death. They pretend not to know the secret room exists, Barnabas wonders aloud for Carolyn's sake how many secrets the room has had. This sets off Carolyn, as her favorite subject is secrets. Barnabas asks what she knows about the room and the coffin's history, and she slips saying "There was no coffin in this room before..." but does not finish. Carolyn says she knows why the coffin is there ... that it is waiting for Barnabas or Julia, whoever is first to die. Carolyn believes that they will die if they stay and purports to have psychic powers. She orders them out and to never return. After they leave, Julia says Carolyn must know about him, but Barnabas is sure she doesn't - he does not want to have to harm her. Finally alone, Carolyn says the coffin "is for...him."

Outside of Collinwood, Julia and Barnabas resolve to move the coffin. Barnabas wants to put it in Collinwood, but Julia says they do not know what is there. Just then, Julia sees an emanation in the window of Collinwood.

At Collinwood, Julia and Barnabas look for whoever they saw, whom they assume is alive. They notice some items they discovered on their last visit are gone, including Elizabeth's journal, but there is also now a knife with dried blood on it. They hear music coming from upstairs, then discuss what all this means while Carolyn lurks outside. She leaves and runs to the Sheriff, who remembers her from the 1970s when he was just a boy. She tells him he must do something for her.

Meanwhile, Barnabas and Julia head upstairs and Julia is afraid to go into her bedroom. She finds that her clothes are perfectly preserved, but the strongbox which held her journal detailing all of her experiments on Barnabas has been opened. She suspects Carolyn found them; a ghostly presence blows out the candle. Barnabas begs the spirit to appear to them, but it only knocks over a lamp. Julia panics and bolts from the room. In the drawing room, the strange light again appears, but disappears just before Barnabas and Julia show up. Julia refuses to let Barnabas put his coffin at Collinwood and decide to place it at the Old House instead. Barnabas declares his intentions to return to Collinwood later tonight, with or without Julia. As they leave, the Sheriff stops them, asking why they are there.

At the police station, the Sheriff claims Collinwood's owner, Carolyn, complained. They claim to be distant cousins, but can't prove it because they left their identification in Bangor. Barnabas claims to be the son of the 1960s/1970 Barnabas, and the owner of the Old House, given to his "father" by Elizabeth in the 1960s. The Sheriff reminds them he did not find them at the Old House, but at the Great House. The Sheriff realizes he has been sidetracked and asks why they were at the Great House. He threatens to charge the duo with vagrancy, but Barnabas counters he has money and owns property locally and he wants to stay at the Old House and maybe restore it. The Sheriff says he might start to restore it, but he will find the Old House is not a healthy place. After they leave, Carolyn comes from the next room where she has been eavesdropping. The Sheriff apologizes to Carolyn for not being able to stop them. Carolyn tells the Sheriff she wants to show him something.

Back at Collinwood, Barnabas feels they must act tonight. The door opens by itself and the strange music can be heard.

The duo hears music and heads upstairs. When they get partway up the stairs the music fades and they hear footsteps. Barnabas goes ahead to investigate, but nobody can be seen. They next hear a sound from the drawing room and head back downstairs.

Carolyn shows the Sheriff a photograph album with a picture of Julia taken in the spring of 1970. He is dumb-founded; she has not aged and even wears her hair the same way. Carolyn claims to have been unable to find a picture of Barnabas other than the oil painting made in 1797.

At Collinwood, Barnabas and Julia speculate on the meaning of the strange music and Julia has a near-miss with an oddly placed statue (a bust). Julia realizes she was the target, similar to Jeanne Flagler, and the two run from the house. Outside, Julia tries to recover her wits, just as they see the menacing ghost of a man in the shadows, sneering at them.

Carolyn: Secrets! Yes! Sometimes it's best not to know secrets! 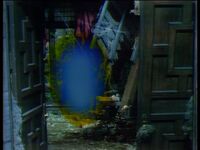 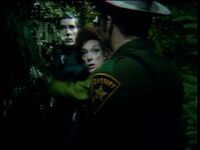 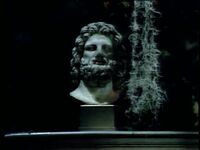 Bust
Add a photo to this gallery
Retrieved from "https://darkshadows.fandom.com/wiki/1063?oldid=142750"
Community content is available under CC-BY-SA unless otherwise noted.