Barnabas and Julia have escaped from the strange world of Parallel Time. But to their shock and horror, they have not returned to the present, but instead find themselves in a ruined, deserted Collinwood in the year 1995. They can discover nothing, except that some catastrophic event happened in 1970, which obviously meant the end of the Collins family as we know them. Desperate for clues, they find out from an aged Mrs. Johnson that someone who can tell them what has happened lives on the beach at Findley's Cove.

Julia finds Barnabas' 18th-century portrait in the shack and takes it as a sign that someone from Collinwood lives at the house at Findley's Cove, but Barnabas is not so sure the family treasures are not stolen. Just then, Julia notices that someone is at the door.

An aged and insane Carolyn enters the shack, which she claims is her home, and thinks that Barnabas and Julia are ghosts. They try to convince her they're not, but she notices their appearance has not changed in 25 years. They press her for clues about the disaster, but she claims "nothing happened" and insists the family will come back one day. Carolyn cackles that she loves secrets and continues to refuse to speak of the 1970 disaster. They also ask for information about her name change, suspecting she married again, but she insists she can call herself whatever she wants. Julia wonders why she doesn't call herself a "Collins," but the name only frightens Carolyn and she says "it's not a good name." She mentions her late husband, Jeb, and she gets even more angry because she remembers that everyone at Collinwood hated him. They ask what would happen if they went back to 1970; she doesn't want to "live through that" again because they weren't there when the disaster happened. She orders the "ghosts" out of her house. Julia promises to return, but Carolyn tells them to never come back.

Barnabas and Julia talk about Carolyn at the mausoleum, where Barnabas plans to slumber. Julia is worried about Barnabas staying at the mausoleum, but it is close to dawn and Barnabas has no choice. Julia wants to stay in the mausoleum and guard Barnabas, but he convinces her to go to the courthouse to search any records of the Collins family from 1970, and try to find out what happened. The approaching dawn convinces Julia that Barnabas is right, although she worries that "tomorrow" will not tell them any more than they now know.

Later that morning, Julia leaves the secret room with a fretful look. Carolyn meets Julia when she exits, demanding to know what she was doing in the mausoleum, and Julia tells her she wanted to know who is buried there, as she is interested in the Collins family. Carolyn tells her not to say that name, and Julia asks why, saying it is an old and honorable name. Carolyn laughs at the notion that the name Collins was honorable. Julia asks Carolyn why she is there, and Carolyn says she is looking for her mother's grave, but then "remembers" that her mother is still alive. Carolyn says she never goes to Collinwood any more and she has everything from there she wants. She next asks Julia where Barnabas is. Julia tells her he is in the village looking for the information Carolyn won't tell her, but Carolyn doesn't sound as though she believes her. Carolyn asks if Elizabeth would be buried there in Eagle Hill Cemetery if she were dead and she has found no grave there for her. She orders Julia to go find her friend before he gets in trouble. After Julia leaves, an aged Professor Stokes emerges from hiding. Carolyn tells him he must make them go away, and he concurs.

Julia shows up at the courthouse, looking for the records of Collinsport, which go back to 1698 when it was founded. Julia tells the clerk she wants the records from 1970, which visibly unnerves him. He claims the records are missing, ostensibly due to a fire a few months ago. Julia can easily tell he is lying, and asks about the tax records, which he also claims were lost. She presses him for what he knows about the Collins family and he mentions a couple by the name of Victor and Jeanne Flagler, who went to Collinwood and found out what horror therein lies. The clerk suspiciously closes the office early for lunch and kicks Julia out. As she leaves, Julia sees Stokes in the hallway, who has been watching her.

Stokes tries not to look at Julia, and when he does, tells her he does not know how she remained young. She reminds him that it was he who first explained Parallel Time, and he tells her that for her sake and Barnabas' they should leave town at once. If they do not, he says they will be forced to act, and then walks away.

After sunset, Barnabas is convinced that he and Julia can persuade Stokes to help them. Julia is convinced Stokes has changed too much. She tells Barnabas that he did not see the look in the record-keeper's eyes when she mentioned the Collins name. She tries to tell Barnabas that Carolyn knew Barnabas was in the secret room. Barnabas doubts her, but Julia says that everyone is too hostile. Barnabas is unwilling to return to Angelique's room and hope to return to 1970 (if the time-warp should work) and watch the disaster happen. They emerge from the mausoleum, prepared to look for Stokes, unaware that he and the records clerk are watching in hiding.

While Barnabas and Julia are en route to the Flaglers', Stokes tells the records clerk that Victor Flagler's story may stop them from returning to Collinwood. Victor Flagler is an angry man whose wife died at Collinwood. He tells Julia and Barnabas he has no use for the Collins family, and when Julia tells him they are going back to the house, he tells them they should not go, and listen to the people who have warned them already. Julia asks about his wife, Jeanne, and picks up her portrait. Victor finally agrees to talk about her death. He says they had gone to Collinwood on a dare, having heard stories of strange music, lights and sounds. While they didn't see anyone, they both felt a great sense of evil, and Jeanne was killed by a falling statue while they tried to escape from the house. Finally, Victor claims that he heard laughter as he examined her dead body, and he fled the mansion.

Barnabas and Julia return to the cemetery, where Barnabas feels they are being followed. Barnabas and Julia talk about Flagler's story. Julia mentions that she also felt an evil presence while listening to the story. The two finally enter the mausoleum and discover the secret room has been opened, and they hear footsteps approaching.

Professor Stokes: Perhaps he can stop them from ever going back to Collinwood again. Perhaps his story will convince them that the forces that are there are best left alone. 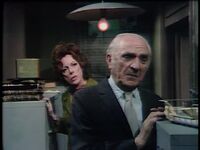 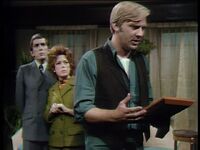 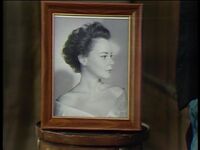 Jeanne Flagler
Add a photo to this gallery
Retrieved from "https://darkshadows.fandom.com/wiki/1062?oldid=142748"
Community content is available under CC-BY-SA unless otherwise noted.