In the year 1995, the estate of Collinwood lies abandoned in ruins.

Collinwood as it exists in the terrifying world of Parallel Time, in the final moments before its ultimate destruction. For on this night, Timothy Stokes, crazed by the collapse of his plans to ruin the Collins family, has set fire to the great house and died in the flames. Barnabas and Julia have made their way to Angelique's room in the hope of reaching their own time before it is too late. Roxanne, however, has not been able to enter the room and join them.

As Barnabas and Julia are trapped in Angelique's room, they hear Roxanne calling for them. Barnabas tries to reach Roxanne, but can't, and the room changes. Julia exclaims they are back in their own time, and Barnabas realizes that Roxanne is trapped in Parallel Time and is lost to them forever.

Barnabas insists they go back, but Julia reasons that they can’t go back to Parallel Time because the Collinwood there has been destroyed, and therefore Angelique’s room no longer exists. Barnabas realizes she is right and laments Roxanne, the first woman he’s loved since Josette. Julia says that a life of love is a rare thing and that he is not the only one who has had hope snatched away. She says people can get used to anything if they have to. Barnabas vows to hate the East Wing room forever. Julia observes that the room seems different, to which Barnabas agrees, noting a feeling of dampness and the smell of decay. They find a part of the hallway caved in with plants growing inside.

Barnabas and Julia make their way to the foyer, which is in ruins. Their investigation proves that the house was not victimized by war or hurricane, but rather has been abandoned, as they find a note in Elizabeth's handwriting which reads, "We must get out of Collinwood before the day is out." Barnabas wonders if Elizabeth, Maggie, and David are all dead. Julia finds papers she left right before getting to Parallel Time, which are now withered and old. Barnabas wonders if radiation may have sped up their deterioration. While searching the fireplace, Barnabas finds Elizabeth's diary, but discovers that other than the date of 1970 at the top of the pages, the notes have all been destroyed.

Moments later, they hear someone, or something, trying to get in the front door. When they go to investigate, it appears to only be the wind, but Julia is not convinced. Barnabas notes that the trees have grown right up to the front door and begins to theorize that they have returned to a time in the future, but not in Parallel Time. Julia begins to panic, but gets a grip on herself and says they must find out what it all means. Barnabas hopes to find out something in the Old House or the cemetery while looking for his coffin. Julia says she is frightened of the house and gladly will go to the cemetery.

After making a trip to the Old House and finding the coffin missing, Barnabas and Julia go to the cemetery to investigate and hopefully find a new coffin. There, they find a new grave belonging to someone named Henry Beecham, who died in 1995, which helps Barnabas and Julia realize that they’re in the future. Nearby, they find David’s grave, marked 1956-1970, but with fresh flowers. Mrs. Johnson, withered and old, appears and implores them to leave his grave alone, but she recognizes them. She thinks they’re ghosts because they have not aged since 1970. Mrs. Johnson says she was with David when he died and that no one was able to help him. They try to get clues from the half-schizophrenic Mrs. Johnson, but she changes demeanor and says, "He just died, that's all." They try to calm her down and say they loved everyone at Collinwood and ask if they are all gone. She begs them not to ask her about what happened in 1970 because it is too painful to talk about. She mentions that it was so horrible, the name "Collins" is now considered a curse. Barnabas asks her if anyone from the Collins family is still alive, and she starts to cry.

Mrs. Johnson says the whole family is alive and well: Elizabeth went to Rome and lives in Europe now, and Roger is also with her. Quentin is in South America, married and fine. Barnabas thinks she’s lying, and Mrs. Johnson breaks down, saying she has spent 25 years trying to forget what happened in 1970 and just wants to be left alone. Barnabas and Julia decide to let her go, but as she leaves, she turns back and says, “Fredricks, the old shack! Findley’s Cove! The old shack!"

Barnabas and Julia arrive at the shack. They find that no one is presently there, but after looking around, they quickly find it is filled with things from Collinwood, including Barnabas' portrait. Julia believes someone from Collinwood lives there, but Barnabas wonders if they may have been looted, possibly by the person responsible for its destruction. They wonder who lives in the shack, and Julia says they'll soon find out as the front door starts to open.

Julia: We forget how rare a life of love can be. You're not the only one who's had so little hope. It's something one learns to live with. We can get used to anything if we have to.

Dark Shadows Everyday - Episode 1061 - I'll Be There For You 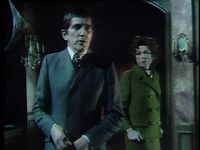 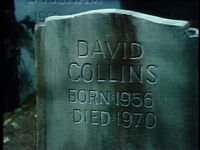 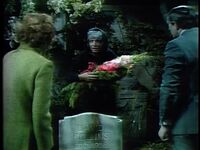 Mrs. Johnson
Add a photo to this gallery
Retrieved from "https://darkshadows.fandom.com/wiki/1061?oldid=144795"
Community content is available under CC-BY-SA unless otherwise noted.