As Timothy sets Collinwood on fire, Barnabas and Julia become trapped in the Parallel Time room.

The great house at Collinwood, in the strange, terrifying world of Parallel Time. On this night, Quentin Collins has been exonerated of the charge of murder, but a very great threat still exists, both to Quentin and to Barnabas Collins. For Timothy Stokes has been prevented from bringing Angelique back from the grave a second time. And now he has vowed his revenge against Barnabas and Quentin. A revenge that is destined to end in tragedy.

While Maggie walks back to Loomis House, she is captured by Stokes in the woods.

Stokes demands to know where Quentin and Angelique's body are, but they are still with the police, according to Maggie. He drags her away with him.

At Loomis House, Roxanne rests on the couch while Barnabas waits for Maggie, Julia, and Quentin to return. Roxanne begins to dream. In her dream, Barnabas tells Roxanne he will soon take her to another time where they can start a new life together. As she turns away from him, he disappears. Roxanne frantically searches for him and finds him in the East Wing at Collinwood, and the two are separated by a wall of fire. She wakes up and screams, but Barnabas is able to calm her down.

Stokes takes Maggie to the drawing room at Collinwood. He ties her up in a chair and tells her he is going to kill Quentin to avenge Angelique's cremation.

Roxanne is still disturbed by the dream she had, but is excited to go with Barnabas back to his own time. Barnabas tells her that things are much more peaceful there than they are in this time. He gets worried about Maggie and decides to go look for her.

About a half an hour later, Julia and Quentin return to Loomis House and are both surprised to see that Maggie has not yet returned. Roxanne informs the two of them that Barnabas is currently out looking for her. The phone rings and Quentin answers. It's Stokes, who tells Quentin that he has Maggie and he is to come to Collinwood alone and unarmed. After he hangs up, Stokes holds up a gun and smiles.

Julia thinks it's better if they wait for Barnabas to return, so that way they can form a plan together, but Quentin decides to go it alone and heads to Collinwood. After he leaves, Julia and Roxanne decide to search for Barnabas.

Quentin shows up at Collinwood and offers himself as Stokes' prisoner in exchange for Maggie's freedom, but Stokes refuses. He asks Quentin if Angelique's body has been cremated yet, and Quentin says it has been, but he doesn't feel any sense of victory about it and is just glad it's over. Stokes declares that he will finish what Angelique started. Quentin is confused, but Stokes tells him that he has nothing left to live for, except seeing Quentin's dead body.

Stokes points the gun at Quentin's head, but Barnabas appears and distracts him; Quentin is able to overpower him and take the gun away. Roxanne also appears in the foyer, but Stokes grabs her and runs off, locking Barnabas, Quentin, and Maggie in the drawing room. Quentin frees Maggie and they go back to Loomis House, while Barnabas searches for Roxanne. Barnabas searches outside, but Stokes and Roxanne are hiding in the servants' quarters.

Julia sees Barnabas in the woods and tells him that Quentin and Maggie are safe at Loomis House. Barnabas hasn't found Roxanne yet, and the two decide to head back to Collinwood.

At Collinwood, Stokes is still holding Roxanne captive in the drawing room and he hears Barnabas and Julia enter. Stokes begins to pour gasoline all over the main floor. Roxanne frees herself and runs upstairs to warn Barnabas and Julia, while Stokes lights a match and sets Collinwood on fire.

Barnabas and Julia are in the East Wing, wondering where Roxanne might be. Julia notices the smell of smoke, and Barnabas realizes the entire hallway is on fire. Roxanne rushes to the East Wing, but she is separated from Barnabas by a wall of fire, just as she had dreamed about. As Barnabas tries to rescue her, the room changes, and Barnabas and Julia are transported back to their own time band. 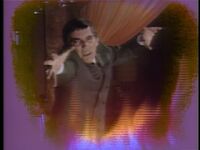 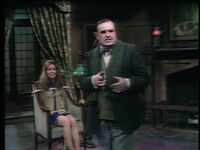 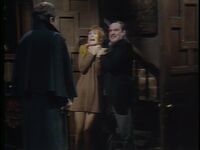