The great house at Collinwood in the dark and frightening world of Parallel Time. On this night, Angelique has been destroyed, but the evil she was responsible for has not ended. Quentin Collins still stands accused of murder. The one person who can save him, Julia Hoffman, has disappeared mysteriously. Barnabas and Maggie have reluctantly concluded that Julia is dead. They have decided to close and lock the doors of the great house, unaware that there is still one person in it.

Maggie and Barnabas sadly close Collinwood forever, unaware that Julia is still alive and in the basement.

Stokes threatens to kill Roxanne if she doesn't tell him Barnabas' secret. He starts to strangle her and she confesses that Barnabas is a vampire. Stokes plans to destroy Barnabas and use Roxanne again as a life force to bring Angelique back. He locks her in a closet and leaves.

Barnabas and Maggie arrive at Loomis House. Barnabas invites her to stay as long as she likes, but Maggie plans to move into the inn the next day. He tells her that Hamilton is preparing the autopsy, and hopes that it will perhaps convince Hamilton that their story is true. As the two talk, Barnabas sees the scarf Roxanne used to try and find Julia. He realizes that the scarf belonged to Hoffman, not Julia. He instructs Maggie to go get a piece of Julia's clothing, much to Maggie's confusion.

Barnabas goes to Roxanne's house and rescues her from the closet. She tells him that Stokes locked her up and he knows that Barnabas is a vampire. Barnabas brushes aside the threat and tells Roxanne there is new hope in finding Julia.

Barnabas brings Roxanne back to Loomis House and uses a brooch that belonged to Julia and she discovers that Julia is alive. Roxanne leads Barnabas and Maggie to the room where Julia is trapped.

As Stokes lurks around Loomis House, Barnabas, Maggie, and Roxanne bring Julia back to the house. Julia tells Barnabas that Angelique admitted to killing Bruno and planting the doll in Maggie's bedroom. The phone rings: it's Hamilton, wanting to speak to Barnabas. Hamilton has concluded the autopsy, which revealed that Alexis was Angelique all along and that Quentin has ordered the body to be cremated so Stokes can never bring her back again. In addition, Julia will need to speak with Hamilton before Quentin is freed of any charges. Julia leaves with Maggie and Barnabas to go to the police station as Stokes watches Roxanne from outside the window.

Stokes enters Loomis House and learns from Roxanne that Quentin is going to have Angelique's body cremated. Realizing that his plans are failing, Stokes vows to have his revenge and chases after Roxanne, but she grabs the knife that Claude gave her and stops him from harming her. Stokes says he will be back and he leaves.

Later, Barnabas returns from the police station and tells Roxanne that Quentin has been cleared of all charges. He notices Roxanne is frightened and he asks her what's wrong. Roxanne informs Barnabas that Stokes is out looking for him and plans to destroy him. Julia calls and tells Barnabas that Maggie is on her way back to Loomis House, but Julia and Quentin will be delayed a couple of hours.

On her way back to Loomis House, Maggie is kidnapped by Stokes.

Timothy Stokes (to Roxanne): I'll first give you the pleasure of viewing the dead, disintegrating body of Barnabas Collins! 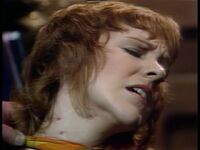 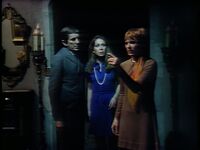 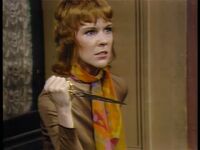 Knife Point
Add a photo to this gallery
Retrieved from "https://darkshadows.fandom.com/wiki/1059?oldid=143168"
Community content is available under CC-BY-SA unless otherwise noted.