Barnabas discloses that he and Roxanne can never be together.

Collinwood in Parallel Time, a house of tragedy. For though Roger and Angelique are dead, what they have started continues, and Quentin is once more jailed for the murder of Bruno Hess. The one person who can prove that Angelique murdered Bruno is Julia Hoffman, but she is missing. And though the police and Barnabas have searched the great house, they cannot find her.

As Barnabas continues to search for Julia, Maggie returns to Collinwood after a disheartening visit with Quentin. She tells Barnabas that Quentin has given up on finding Julia and wants her to leave Collinwood forever. He has declared he will never enter the house again and he can not bear to think of Maggie still there.

Meanwhile, Julia is still trapped in the basement, wondering where Barnabas is.

Barnabas thinks it's a bad idea to close Collinwood forever and asks for more time, but Maggie's mind is made up. He can only wonder where Roxanne and Julia might be.

Stokes discovers Roxanne in the woods, but she tells him to leave her alone. He again blames Barnabas for Claude’s death but she no longer believes him. She tells him she knows how he used her to bring Angelique back to life and hates him for it. Stokes tells her that Barnabas has a hidden secret and she shouldn't trust him, and he vows to find out what his secret is.

After Maggie leaves to go pack her belongings, Barnabas again examines the blue prints of Collinwood. Roxanne suddenly appears and tells Barnabas that she is afraid when she is not with him.

Although Barnabas is very happy to see her, his vampire instincts take over and he fights the urge to bite her, as he cares for her too much. She misreads his torment as coldness, and although he confesses that he loves her, he orders her to leave him. She pursues him and declares that whatever the cost, she wants him to love her. Barnabas still resists her and tells her they can never be together. Roxanne, on the verge of tears, runs out of the house.

Later, Roxanne is wandering in the woods, crying out for Barnabas. At Collinwood, Barnabas is sad he had to send Roxanne away, but feels it was right so he doesn't harm her. Roxanne eventually comes back and again tells him that she wants to be with him, whatever the cost. Barnabas gives in and bites her.

A few hours later, Maggie comes downstairs and sees Barnabas. Barnabas introduces Roxanne to Maggie and asks her to bring them something that belonged to Julia. She returns with a scarf and Roxanne uses her psychic abilities to try to locate Julia. To their horror, Roxanne declares that the woman who owned the scarf is dead.

In the basement, Julia is still alive and begs for someone to find her.

Roxanne is saddened that she couldn't help Barnabas and Maggie, but Barnabas realizes there is no hope and decides to take Maggie's advice and close Collinwood forever.

Stokes visits Roxanne at her house and reminds her that they are forever linked together, but she wants nothing to do with him and tries to run from the room. The two have a scuffle and Roxanne's scarf accidentally comes off, revealing her bite marks. Stokes realizes that Barnabas is a vampire.

With a heavy heart, Maggie locks up Collinwood, and wonders if anyone will ever set foot in there again. As she and Barnabas walk away from the house, Julia remains locked in the cellar.

Roxanne: Oh, Barnabas, but what is love but sharing?
Barnabas: Oh, you don't know.

Roxanne: Do you know how the world is, Barnabas? It's so very light when I'm with you. But when you go away, it's so dark, so very dark.

Dark Shadows Everyday - Episode 1058 - When I Am Not With You 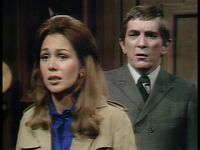 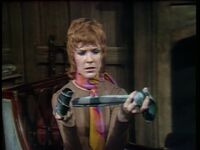 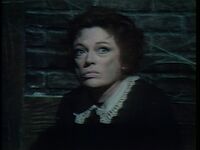 Trapped
Add a photo to this gallery
Retrieved from "https://darkshadows.fandom.com/wiki/1058?oldid=142738"
Community content is available under CC-BY-SA unless otherwise noted.