Barnabas finds that Timothy plans to raise Angelique as soon as he can get the body.

Night on the great estate of Collinwood, and in the strange world of Parallel Time. Desperately, Barnabas Collins attempts to save both Quentin and Julia, but he will meet with challenges that seem to be beyond even his special powers. And the triumph over Angelique may become defeat.

Stokes is having a drink at his house when there is a knock on the door. Barnabas enters. Stokes tells Barnabas that he will simply bring Angelique back to life with another life force, so he can stop celebrating the fact that Angelique is currently dead. Barnabas says he isn't there to celebrate, but wants to be present when Hamilton comes to discuss a new murder. When Stokes asks who is dead now, Barnabas tells him Claude has been murdered and he accuses Stokes of killing him.

Barnabas believes that Stokes killed Claude because he doesn't want him to have Roxanne back, but will leave that to Hamilton to decide. Hamilton soon arrives and asks Barnabas to leave. Stokes laughs at everything Barnabas has told him concerning recent events at Collinwood, and even shows him the room where he once kept Roxanne, which he has now turned into a storage room. Hamilton informs Stokes they are going to have an autopsy on Angelique's body. Stokes gets nervous and demands her body be returned to him, but Hamilton tells him he will have to wait.

Barnabas is in the East Wing at Collinwood looking at blue prints of the house, trying to find Julia.

Meanwhile, Julia is still in the basement, struggling to stay awake.

Julia thinks she hears footsteps, but no one appears. She cries out for Barnabas.

Hamilton visits Barnabas at Collinwood and tells him they will soon have an autopsy on Angelique's body, but once the autopsy is completed, her body will likely be returned to Stokes. Barnabas is convinced Stokes will try to bring her back again, and must find Julia and Roxanne quickly so he can prove his story to Hamilton.

Roxanne is hiding at an unknown location and Stokes arrives. He informs her that Claude is dead and was stabbed in the back by Barnabas. Roxanne doesn't believe that Barnabas would hurt Claude, but Stokes puts her in a trance and reminds her of an oath she once took, where if anyone hurts Claude, she must avenge his death.

At Collinwood, Barnabas and Hamilton are on the phone. Barnabas is getting ready to search the basement for Julia and Hamilton agrees to help. After he goes upstairs, Roxanne enters the house, still in a trance, and has a knife in hand.

Roxanne finds Barnabas in the East Wing and asks why he killed Claude. She holds up the Claude's dagger and prepares to kill Barnabas, but Barnabas tells her now that Claude is dead, she is free from his control. Roxanne is confused and not sure what she will do without Claude. Barnabas insists that she tells Hamilton everything she knows about being used as a life force. She gets frightened at the concept of talking to the police and runs out of the house.

Hamilton arrives at Collinwood and he enters the basement with Barnabas.

Meanwhile, Julia is still trying to prevent herself from falling asleep, but she decides to lay down on the bed. She falls asleep and has a dream where Barnabas beckons Roxanne to join him in the East Wing, where they will soon leave Parallel Time together and forget everything that has happened because they believe that Julia is dead. As she sleeps, Barnabas approaches the room she is being held in and calls out for her, but she is still sleeping and does not hear. 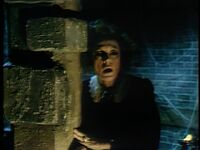 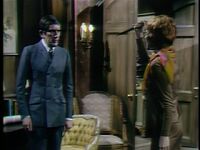 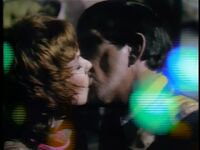 Dream
Add a photo to this gallery
Retrieved from "https://darkshadows.fandom.com/wiki/1057?oldid=135795"
Community content is available under CC-BY-SA unless otherwise noted.