At the command of Claude, Roxanne speaks. Quentin reveals a secret to Maggie.

The great house at Collinwood in the dark and frightening world of Parallel Time, where Barnabas Collins fights to put an end to the evils caused by one woman. On this night, the future of Quentin Collins is at stake. Accused of murder, Quentin could eventually be hanged unless Barnabas can prove that Angelique Collins is really the guilty one.

Angelique has hypnotized Maggie, and instructs her to shoot Quentin when she sees him in the East Wing.

At Loomis House, Claude forces Roxanne to speak and Angelique dies instantly. At the same moment in the East Wing, Maggie is released from her power before shooting Quentin and collapses to the floor. Calmly, Barnabas goes to phone Hamilton and tells him that Alexis is dead (he did not know that Alexis was Angelique). Quentin goes downstairs in bewilderment where he discovers Alexis has died. Barnabas informs him that it is Angelique, not Alexis who has died, and that she was Bruno's true murderer. Quentin asks what happened to Alexis, and Barnabas regretfully tells him that it was her body that was destroyed by Cyrus, not Angelique's. Quentin tells Barnabas of what Maggie attempted to do, and Barnabas explains that she was under Angelique's spell. With Angelique dead, Quentin realizes there is no hope of convincing the police he didn't kill Bruno. Barnabas tells him they must find Julia, but for now he instructs Quentin to go take care of Maggie.

Later that night, Hamilton arrives at Collinwood and Barnabas agrees to tell him everything that has happened at Collinwood.

At Loomis House, Claude wants Roxanne to leave with him, but Roxanne still feels weak and wants to rest. She finally admits she doesn't want to leave with Claude, and instead wants to wait for Barnabas. Roxanne points out how he was kind and good to her. Claude confesses her love to her, but Roxanne rejects him and tells her she is in love with Barnabas. Roxanne wants him to let her go, but he refuses and puts her in a trance.

In the drawing room, Hamilton refuses to believe any part of Barnabas' story and tells him the search for Quentin will continue. Barnabas convinces him to go to Loomis House with him so they can talk to Roxanne.

Barnabas and Hamilton arrive at Loomis House, but Roxanne is gone. Barnabas assumes that Claude has taken Roxanne away. Hamilton tells Barnabas his story has no strength behind it and Quentin is still considered guilty.

Back in Angelique's room, Maggie awakens to find Quentin watching over her. She tells him she is not afraid, as she knows he is innocent and the two embrace. They talk over the troubles they had and decide to start all over again. Maggie tries to explain her jealousy of Angelique, and Quentin reacts with disbelief. He reveals to her that despite all she had thought, he never loved Angelique. In fact, he hated her. Maggie listens with disbelief as Quentin explains how Angelique had been a cold, manipulative, and unfaithful wife to him, but would never grant him freedom. He had always wished to be free from her, and had felt nothing but relief upon her death. He had feelings of guilt, until he met Maggie, who was the one person he's ever really loved. The two kiss passionately but are interrupted by Hamilton, who takes Quentin into custody.

After Quentin is taken away, Barnabas searches for Julia but she can't find her. Instead, he tells Maggie he is going to search for Roxanne and will start at Stokes' house. As Barnabas walks through the woods, he finds Claude has been stabbed to death, and he wonders if Roxanne is dead also.

Maggie: Quentin, I know now that there can never be another woman you'll love as much as you loved Angelique.
Quentin: As I loved Angelique? Maggie, I hated Angelique! I hated the ground that she walked on. 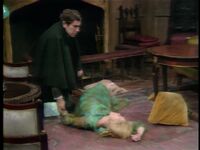 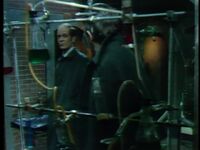 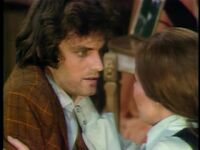 Lovers Reuninted
Add a photo to this gallery
Retrieved from "https://darkshadows.fandom.com/wiki/1056?oldid=142735"
Community content is available under CC-BY-SA unless otherwise noted.