After being hypnotized, Maggie is prepared to shoot Quentin.

The great estate of Collinwood in Parallel Time. Where the demented Roger Collins, to protect his own dark part in the death of Angelique, has burdened his mind and spirit with two additional murders, and is now confronted with the necessity of yet another: the death of Maggie Collins.

Roger confesses to Maggie he killed Angelique, Carolyn, and Elizabeth, and prepares to strangle Maggie.

Angelique interrupts Roger and he tries to get rid of her, but she hears Maggie choking and forces her way past him. Maggie tells her (thinking she is Alexis) that Roger killed Angelique. Angelique says the man who murdered Angelique deserves a very special punishment.

In the basement of Loomis House, Barnabas ponders where Julia might be as he gazes over Roxanne. He wonders if Angelique has done something to her. He decides to start the experiment in hopes of getting her to speak so Angelique can be destroyed, although he is aware that without Angelique, he can't clear Quentin of the murder charges or find Julia.

At Collinwood, Roger runs out of the house. Meanwhile, from the drawing room window, Maggie and Angelique notice all of the state troopers on the estate. Angelique decides to head upstairs for the night. She goes to the East Wing and uses witchcraft to summon Roger.

At the Loomis House, the experiment has failed once again and Barnabas decides his only hope to be successful is to find Julia. As Barnabas leaves the house, Claude, who was hiding in the bushes, sneaks in.

Back in the East Wing, Roger comes into Angelique's darkened room and stares at the portrait of Angelique. Angelique appears and reveals her true identity, but Roger is not afraid of her and says the only thing he has left in his life is his love for her. He asks for forgiveness, but suddenly Angelique starts to feel cold. Roger holds out his arms and tells her he will warm her. She says it's only fate that he holds her while she is cold, and she kisses him. Roger collapses because of how cold he has become and Angelique tells him he is dying. Angelique holds him closer and Roger dies.

Claude enters the basement of Loomis House and finds Roxanne on the table. She opens her eyes.

Barnabas goes to Collinwood and tries to get Angelique to tell him where Julia is. She taunts Barnabas about her whereabouts, but suddenly starts to feel weak again and she collapses onto a chair in the drawing room. Angelique tells him Roxanne must not be allowed to speak. For once, Barnabas agrees with her and he quickly runs out.

Claude tells Roxanne that she must obey all of his orders from now on. Barnabas walks in and stops Claude from trying to get her to speak. He asks Claude about the grave in the cemetery from the 19th century, but Claude says it's merely his grandfather's grave. Barnabas tells Claude he will kill him if he gets Roxanne to speak, and Roxanne takes Claude's side in the argument. Claude says he doesn't care about Quentin or anything else that is happening at Collinwood, and he only wants to leave town forever with Roxanne. He orders Barnabas to go find Angelique and tell her that her destruction will happen in a matter of minutes.

At Collinwood, Angelique is on the brink of death and Maggie walks in. She asks Maggie to help her to the fire. Angelique starts to perform a spell and she puts Maggie into a trance. Angelique orders Maggie to retrieve a gun from the desk drawer and to go to the East Wing, where she will wait for Quentin. When Quentin arrives, she will shoot him.

At Loomis House, Claude is still trying to get Roxanne to speak. Meanwhile, Barnabas returns to Collinwood and finds Angelique, near death. Barnabas orders her to sign a confession that Quentin is innocent in the murder of Bruno and that she has hidden Julia somewhere. Angelique refuses and says she returned to destroy Quentin, not save him.

In the East Wing, the door starts to open and Maggie raises the gun.

Angelique: You introduced me to the cold of the tomb, Roger Collins. I felt I could do no less for you. 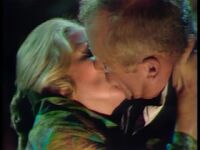 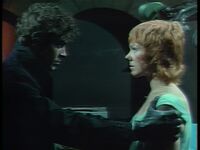 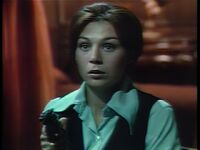