The great estate of Collinwood in Parallel Time, and a night of treachery and horror for two women. Elizabeth Stoddard lies dead, her body concealed within a window seat, the victim of her brother, Roger, who murdered her when she discovered that he was the secret killer who terrorized Collinwood. And in another part of the great house, Julia Hoffman learns that she has not fooled Angelique as well as she thought she had.

Angelique declares to Julia that she will die in the Collinwood basement unless she tells her Barnabas' secret.

In the drawing room, Roger realizes he needs to find of a way to dispose of Elizabeth's body. As he heads upstairs, he spots Angelique leaving from the servant's quarters. He tells her he is going to bed and quietly heads to the East Wing.

Once he is by himself in Angelique's room, Roger is heartbroken that he killed his own sister, but tells himself it had to be done. He decides to frame Quentin for the murder, since he is already under suspicion and on the run from the police.

The next morning, Quentin meets with Angelique in the East Wing and he wonders why he wasn't informed of Carolyn's death. He is convinced that Maggie did it, but Angelique says she doesn't know who murdered her. Quentin tells Angelique to get Maggie out of the house before anyone else dies. Angelique asks him if he is still in love with her, but he is still convinced she is a witch.

In the basement, one of Julia's candles has burned out and she lights the final one. She pounds on the door and calls for help.

Roger goes to the East Wing to make sure he left no traces of his scuffle with Elizabeth. Angelique catches him and Roger admits he hopes the room changes so they can go to the other timeband together and start all over. Moments later, Maggie runs in and screams that Elizabeth has been murdered and her body is in the tower room. She breaks down and wonders if Quentin did it.

Later that day, Roger speaks with Maggie in the drawing room. Everyone has assumed that Quentin is the murderer, and Roger continues to attempt to cast more suspicion on him.

Upstairs, Angelique informs Quentin that Elizabeth was strangled. He is still convinced that Maggie killed her, and wonders how he was fooled into marrying her.

In the drawing room, Maggie tells Roger that she is planning on taking Daniel and Amy from the house and sending them to the inn so Chris can watch over them. She even suggests that they close up the house for good and leave Collinsport forever.

Angelique returns to the basement and again asks Julia for Barnabas' secret.

Angelique tells Julia that Barnabas has been looking for her. She offers to let her go back to her own time once she tells her Barnabas' secret. Angelique opens the door and Julia tries to escape, but Angelique is able to push her away.

Maggie returns to the drawing room and tells Roger she can't find Julia anywhere. Angelique walks in and informs them that she has left Collinwood forever because it is too dangerous to stay in the house. Maggie also says she is planning on leaving, but Angelique says she is not afraid. After Maggie leaves, Roger again compares Alexis to Angelique, but this time being much more frank about it. Angelique wonders if he knows her secret.

Upstairs, Quentin sneaks into the master bedroom and searches for evidence that Maggie killed Elizabeth. He opens a cabinet and finds a handkerchief that belonged to Elizabeth. Maggie walks in and catches him.

Quentin confronts Maggie and tells her that he will kill her if that's what it takes to stop all of the madness in Collinwood.

Meanwhile, Roger returns to the East Wing and confesses to the portrait that he killed Elizabeth. Maggie runs in, screaming, and tells him that Quentin is in the house and is trying to kill her. Maggie wants to call the police so Quentin can be caught. Roger seems to agree with her because he never wants to see Angelique's room again. He wonders why Elizabeth had to come to the East Wing the other night, and if she hadn't, she would still be alive. This revelation strikes Maggie and she starts to ask questions about why her body was found in the tower room instead. Maggie tries to run out, but Roger has locked the door and he confesses to her that he killed Angelique, Carolyn, and Elizabeth. Roger grabs Maggie's throat and starts to strangle her.

Roger (to himself): You had to kill Elizabeth. She would have called the police! Someone will — someone else! Is this never going to end? I know — Quentin! Quentin killed her! They can be made to think that!

Dark Shadows Everyday - Episode 1054 - Another Day in the Desert 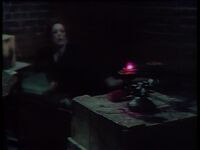 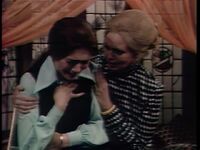 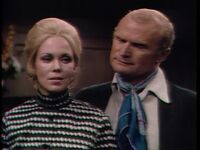