Angelique locks Julia inside a secret room in the basement of Collinwood.

The great house at Collinwood in the frightening world of Parallel Time, where an atmosphere of terror prevails. It began with the murder of Angelique Collins, and it became even more terrifying after her return from the grave. Quentin Collins has been accused of murder, but is at large somewhere on the estate. And on this night, one woman who is trying to help him clear his name, will discover that her own life is in imminent danger.

Angelique catches Julia at the cave and refers to her as "Dr. Hoffman."

Julia pretends to have no idea what she is talking about, but Angelique explains that she saw Quentin and Maggie from the other timeband and is suspicious. Julia pleads with her that she is the Hoffman that she knows and appears to get Angelique to believe her for the time being. The two return to Collinwood.

At Collinwood, Elizabeth enters the drawing room to find Roger drinking. Elizabeth tells him she couldn't sleep because she could feel Carolyn's presence in her room, and that she is trying to tell her who the murderer is.

Roger gets upset with Elizabeth's claims and she accuses him of not wanting to know who the murderer is. The argument is interrupted by Barnabas' arrival. Roger just wants Elizabeth to go to sleep, but Elizabeth says there is no hope in her resting tonight. She goes upstairs as Julia and Angelique return. As the three make small talk, Angelique asks him where he goes during the day. Barnabas doesn't answer, but Angelique says she will soon find out.

In Angelique's room, Roger is speaking to the portrait of Angelique. Roger, on the verge of tears, admits that he murdered both Carolyn and Angelique. Elizabeth walks in and hears his confession, and Roger catches her.

Roger tries to pretend he is only drunk and was just rambling, but Elizabeth realizes that he murdered Angelique and Carolyn found out, so he killed her too. Elizabeth grabs a statue and tries to hit him over the head with it, but Roger is able to overpower her and starts to strangle her.

Angelique takes Julia into the basement of Collinwood and tells her they are going to hide Quentin there. She instructs Julia to enter first, and then reveals the room isn't for Quentin, but it's for her instead. Angelique lists off every instance that she was suspicious of her, and Julia finally confesses that she is the Dr. Hoffman from the other timeband, and that Hoffman is dead. Angelique realizes Julia killed Hoffman because she found out Barnabas' secret, and tells Julia she will not leave the basement of Collinwood until she tells her the secret of Barnabas.

In the East Wing, Roger places Elizabeth's dead body in a sitting chest just before Barnabas walks in, and wonders why he is in Angelique's room.

Roger is in a state of panic and Barnabas wants to talk about Elizabeth. Barnabas notices the broken statue on the floor and wonders if something happened. Roger becomes increasingly nervous and only wants to go downstairs, to which Barnabas finally agrees. When the two go back downstairs, Roger continues to become more unstable and tells Barnabas it is probably best for him if he gets some rest.

In the basement, Angelique again asks Julia what Barnabas' secret is, but Julia is able to resist and calls her out on killing Bruno and framing Quentin. Angelique tells Julia she will spend the rest of her life in the basement unless she tells him what she wants to know about Barnabas.

Elizabeth: Do you think anyone that has been brutally murdered can ever be at rest?

Roger: (to Angelique's portrait) I was foolish to think that everything would be changed once you were gone. Nothing is changed except me. You've dominated our lives more than ever. 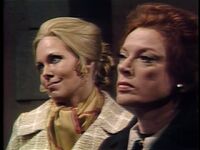 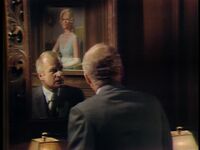 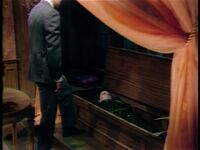 Sororicide
Community content is available under CC-BY-SA unless otherwise noted.