Carolyn goes to the tower room where she encounters Angelique's murderer.

Parallel Time at Collinwood. A dark, hazy morning with the fog rolling in from the sea. And the great house, with its many secrets, seems more ominous than ever before. For there are many who want to know what its secrets are. Secrets that may mean the difference between life and death for the person who knows them.

Carolyn drunkenly tells Roger that Alexis is really Angelique, but she is overheard by a shadowy figure standing in the hallway.

As the unknown person continues to eavesdrop, Carolyn goes on to declare it's true. She tells Roger that Alexis bears the mark at the back of her skull where Angelique was murdered. Roger gets furious with her and thinks Carolyn has lost her mind. Meanwhile, Amy discovers Mr. Trask eavesdropping at the door. He tells her to leave him alone. Back inside the room, Roger declares that Carolyn is drunk, but she is unfazed. Roger states that Angelique would want revenge, and Carolyn points out that Quentin is on the run from the police with a charge of murder, which Roger cannot deny. As Trask continues to eavesdrop, Angelique approaches him and he quietly leaves. Angelique then enters the drawing room, much to the surprise of Roger. Carolyn mocks Roger in front of Angelique about knowing so many secrets at Collinwood, before she finally decides to leave. Trask decides to follow her.

As Carolyn is working in the parlor at Loomis House, Trask walks in and admits that he heard everything Roger and Carolyn said. Trask wants to know how she knows Alexis is Angelique. Carolyn starts laughing and accuses him of being in love with Angelique, just like everyone else at Collinwood is. Frustrated, he grabs her and Carolyn stops him. Trask says she will regret not telling him what he wants to know.

At Collinwood, Elizabeth and Angelique are in the drawing room when Carolyn stumbles in, still very drunk. Elizabeth tries to help her, but Carolyn says no one can help her anymore. She admits that she is relieved that Elizabeth wasn't the murderer, which stuns Elizabeth. As Roger eavesdrops outside, Elizabeth admits she hated Angelique, but would never consider killing her. Carolyn tells her she knows who the real murderer is, but Elizabeth passes it off due to her drunkenness. She even mentions that she knows where Quentin is. Roger continues to eavesdrop, but unbeknownst to him, someone is eavesdropping on him from the servant's quarters. In the drawing room, Carolyn tells Elizabeth that at nightfall she will reveal who the murderer is. Roger then realizes that someone was watching him, but doesn't know who.

Amy goes to the kitchen at Collinwood, where Trask is sharpening a knife. She apologizes for what happened earlier in the morning, and tells him that she heard footsteps coming from the tower room again.

In the drawing room, Elizabeth expresses her disappointment about Carolyn's behavior. Roger wants to have her taken to a mental institution, but Elizabeth won't have any of it.

Meanwhile, Trask is about to enter the tower room, but Carolyn catches him and kicks him out while she goes into the room.

Elizabeth and Amy enter the kitchen, but Trask is nowhere to be found. They are both worried about Carolyn and her mental stability. Amy notices that a knife from the kitchen is missing, but the two don't think anything of it and leave.

Carolyn is still in the tower room, trying to talk to William. She hears the door open and someone approaches her. Carolyn recognizes the person as Angelique's murderer and says she has been waiting for them. The person holds up a knife and stabs her.

Carolyn: You should try drinking before lunch, Mother. It makes the day just, sort of, float along...especially if you don't eat lunch...at all.

Carolyn: No lecturing, Mother. I am a recent widow, and I do as I like with my life. I'm only sorry now...that I let Will's drinking bother me. I should simply have joined him.

Carolyn: Evening brings another secret...one that speaks...and tells me what to do.

Dark Shadows Every Day - Episode 1049 - All the Secrets 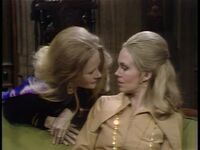 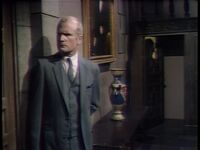 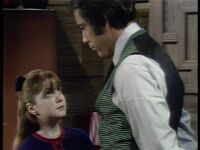 Amy & Trask
Add a photo to this gallery
Retrieved from "https://darkshadows.fandom.com/wiki/1049?oldid=142727"
Community content is available under CC-BY-SA unless otherwise noted.