Inspector Hamilton discusses his suspicions of Julia with Angelique.

The great house at Collinwood in the dark and disturbing world of Parallel Time. Here, Barnabas Collins has discovered that one evil woman has set out to destroy Quentin and Maggie Collins. Barnabas knows that the woman who calls herself Alexis, but is really Angelique, will stop at nothing to achieve her goal. On this night he has found what he believes to be a way of sending Angelique back to her grave.

Julia returns to Loomis House and Barnabas informs her that Roxanne is back safely in the secret room behind the bookcase. He tells her that they must find a man named Claude North. Julia recalls the name from the sketch and Barnabas tells her that he found Roxanne at his grave. As the two discuss Claude, there is a knock at the door. Inspector Hamilton shows up and wants to ask questions about William's death.

Hamilton tells him he doesn't want to ask Barnabas questions, but he wants to talk to Carolyn. Carolyn soon wanders down the stairs, with a bottle and still very drunk. She almost opens the closet where Julia is hiding, but Barnabas stops her and gives her another drink. Hamilton asks Carolyn many personal questions surrounding William's death, including if she really thinks William jumped of his own free will. Barnabas is unnerved by some of the questions, and finds out that he also wants to talk with Julia Hoffman, since she is an old friend. Hamilton asks Carolyn about the relationship between William and Angelique, but Carolyn has had enough and kicks him out. Julia re-enters the room and wonders how she is going to deal with Hamilton's questions. She decides to head back to Collinwood and get it over with. Barnabas warns Carolyn she had better stop drinking before she says something to the wrong person.

Julia arrives at Collinwood and Hamilton asks her questions about William's death. Hamilton is apparently an old friend of Hoffman, and he becomes concerned about her memory when she doesn't remember that his wife is dead.

Hamilton continues to notice Julia's strange behavior, but he allows her to leave.

Upstairs, Roger is with Angelique and he is upset that Hamilton is in the house asking questions. Roger feels there is no need for him and he is just wasting his time, but Angelique is fine with it and willing to cooperate.

Later that night, Julia runs back to Loomis House and is very worried about her meeting with Hamilton. She is sure that he knows she isn't the same Julia Hoffman, but Barnabas insists she is in no danger unless he brings it up to Angelique.

Back at Collinwood, Hamilton interrogates Angelique and tells her the police may have to hold her as an accessory to murder.

Angelique is shocked at Hamilton's claims, but he tells her that he had a court order to exhume the body that Quentin and Cyrus destroyed, but there was no body when they opened the coffin. He asks her many questions as to why the body was destroyed, and Angelique, posing as Alexis, admits that the body was perfectly preserved, and since she was involved with the occult, they felt it was possible she might return from the grave. Hamilton is very skeptical, and is convinced Angelique murdered Will Loomis, but he needs to get evidence to arrest before he holds her, and needs to find Quentin. Before he leaves, Hamilton points out that Julia's behavior has been very different and she doesn't seem like "the same Julia Hoffman." He lied to her about being satisfied.

The next morning, Carolyn, still drunk, sees Roger in the drawing room. He is upset that she is still drinking when it is so early in the morning. Carolyn tells him that drinking is her only way to survive because she knows too many secrets for her own good. Roger gets annoyed with her intoxication, but she tells him that she can prove that Alexis is really Angelique. Someone outside the drawing room is listening.

Carolyn: We're a very strange family, Inspector, and Collinwood is not exactly a picture-book house by the sea. There's a skeleton in every closet, and there are a lot of closets, baby! Let me put it this way, Inspector: Collinwood is a nice place to visit, but you would not want to live there.

Inspector Hamilton: Mrs. Loomis, I have one last question. What was the relationship, if any, between your husband and the first Mrs. Collins?
Carolyn: You were right Inspector. (screaming) That was your last question! 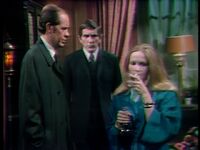 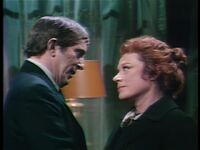 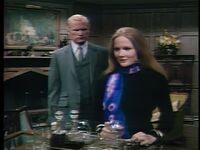 Secrets
Add a photo to this gallery
Retrieved from "https://darkshadows.fandom.com/wiki/1048?oldid=142725"
Community content is available under CC-BY-SA unless otherwise noted.