Roxanne is able to walk and responds to the drawing of her by Claude North. Carolyn is crushed to learn that Will is dead and threatens to expose Barnabas' secret.

The great house of Collinwood in the dark and forbidding world of Parallel Time, in which the evil plans of one woman have produced an atmosphere of terror. On this night, Barnabas Collins has made a desperate attempt to penetrate the secret of how this woman was able to return from the grave. He knows that she exists by using the life force of another nameless woman.

Barnabas talks to the unconscious woman after Julia's experiment fails. Shockingly, she opens her eyes and sits up. At the same time, Angelique collapses in the foyer at Collinwood.

Angelique struggles to regain her strength and attempts to drag herself to the phone to call her father, but she loses her consciousness.

At Loomis House, Barnabas brings the woman into the parlour. He tells her that she is very lovely and asks if she can understand him, but she is unresponsive and in a daze. Barnabas shows her a picture that was drawn of her by Claude North from the mausoleum. She clearly recognizes the picture, but she is still unable to speak. Barnabas prepares to take her somewhere which will hopefully help her regain her memory.

Back at Collinwood, Angelique makes it to the phone, but again faints. Maggie runs down the stairs to help her and call a doctor, but Angelique only wants her father.

Barnabas takes the woman to the Collins mausoleum. She is hesitant to enter, but she obliges to Barnabas' command. Once inside, the woman is clearly frightened and Barnabas opens the secret room. The woman gasps at what she sees.

Barnabas assures the woman that no one will harm her, but she is still afraid. After walking through the room, Barnabas notices a dagger is sitting on a chair and realizes that someone has been in the secret room recently, as it was not there previously.

Stokes visits Angelique at Collinwood. He identifies the woman as "Roxanne" and declares that once she is able to speak, Angelique will be destroyed. Stokes isn't sure what else he can do, but he lights three black candles and begins to perform a ceremony. As he speaks to Roxanne, she starts to feel weak and Angelique regains some of her strength. Stokes plans to contact Claude in hopes of locating Roxanne.

Meanwhile, Barnabas brings Roxanne back to Loomis House and places her inside the secret room behind the bookcase. He hears a car approaching outside and closes up the room. Carolyn has returned and calls out for William. A look of sadness overcomes Barnabas' face and he informs her that William is dead.

At Collinwood, Stokes tells Angelique he is going out to search for Claude. Angelique wants to know the relationship between Claude and Roxanne, but Stokes refuses to tell her and leaves.

In the drawing room, Maggie tries to console Carolyn, but she isn't having much luck. Carolyn admits that regardless of all the trouble they had in their marriage, she was always very much in love with him. She quickly points her suspicions to Barnabas, and tells Maggie he isn't who he says he is. Carolyn almost tells Maggie his secret, but Barnabas shows up just in time and stops her. As the two argue, Stokes walks downstairs and starts to eavesdrop. Stokes realizes that Loomis House is empty with Barnabas and Carolyn here, and decides to leave to go search for Roxanne there. Barnabas asks Maggie to leave so he and Carolyn can talk. He again apologizes and vows to avenge her husband's death.

Later that night, Barnabas and Carolyn return to Loomis House. As Carolyn goes upstairs to sleep, Barnabas again promises to destroy Angelique. Once she is gone, Barnabas opens up the secret room and finds Roxanne missing.

Carolyn (re: Collinwood): There's such a fearful unreality about this place. No one in it is what he seems to be...or pretends to be. 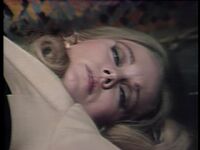 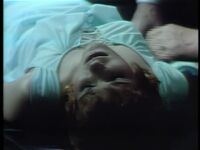 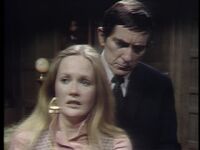