Barnabas decides to steal the unconscious body being used to keep Angelique alive.

The great estate of Collinwood in parallel time. And a mounting tension permeates every life there. For Quentin Collins, accused of the murder of his wife, Angelique, and of Bruno Hess, has escaped from jail, and Barnabas and Julia are determined to find the secret of the seance at which Angelique died. And this night, in Loomis House, Carolyn has had a very revealing dream.

Julia returns to the Loomis House and Carolyn tells her she knows who murdered Angelique.

Carolyn panics and refuses to reveal who she suspects murdered Angelique. She wants to go to her room to rest, but Julia won't let her. Carolyn tries to brush her off, saying it was only a dream, and dreams are rarely true. She runs off and Barnabas enters Loomis House. Julia tells Barnabas of Carolyn's dream and wonders if Will is perhaps the murderer. Barnabas decides to question Will, but he gets upset with his accusations and denies killing Angelique. Will leaves the house and Carolyn walks down the stairs. Barnabas confronts her about her dream and reminds her that it is bad to protect a murderer. He puts her in a trance and gets her to admit that Elizabeth killed Angelique.

Barnabas finds it difficult to consider that Elizabeth is the murderer. Carolyn reveals that Elizabeth hated Angelique and they both treated each other very badly. She is positive that the hat-pin used to kill Angelique belonged to her, and tells Barnabas that she and Will got in a big fight just before the seance because she thought Will was in love with Angelique. Carolyn, finally, begs Barnabas that he won't go to the police. He agrees for the time being.

At Collinwood, Elizabeth and Will are playing cards in the drawing room. Elizabeth wonders where Quentin might be, and if he is hiding somewhere in the house. She asks Will if it's okay to stay at Loomis House for a few days, but Will tells her there is "too much" going on there right now.

Barnabas tells Julia what Carolyn told him. He has noticed a pattern that one by one, the people involved at the seance are being killed. Barnabas then suggests stealing the body at Stokes' house so they can perhaps control Angelique, but Julia thinks that Angelique would know that Barnabas is involved, and she refuses to help him. He instead asks Will for help.

Barnabas takes Will to the Collins mausoleum, thinking that the secret room would be a good place to hide the body from Stokes' house. When they open the secret room, the discover that someone has been living in it. Barnabas finds a picture of the girl being used as Angelique's life force, and it was drawn by someone named Claude North. Will says he has never heard of him. Barnabas wonders what the connection might be between Claude and the body at Stokes' house.

Carolyn, still upset about the vision she had earlier, goes to Collinwood to visit her mother. Elizabeth tells her she wants to sell some of her jewellery, including the hat-pin used to kill Angelique. Carolyn wants to talk about the seance, but Elizabeth says it has been discussed enough.

In the middle of the night, Barnabas and Will enter Stokes' house and they prepare to steal the body. Will feels that someone else is in the room with them. Soon they hear the ghostly voice of Hoffman, who tells them she will not let them take the body.

Carolyn Loomis: I remember it now! I know who murdered Angelique!

Dark Shadows Everyday - Episode 1043 - The Heat Death of the Universe 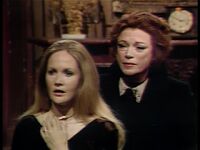 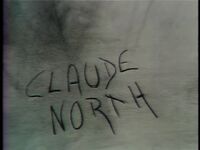 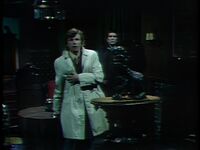 Spooked
Add a photo to this gallery
Retrieved from "https://darkshadows.fandom.com/wiki/1043?oldid=142697"
Community content is available under CC-BY-SA unless otherwise noted.