Maggie finds the voodoo doll and starts to suspect that Quentin killed Angelique.

In the strange world of Parallel Time at the great estate of Collinwood, the struggle to save Quentin Collins and his bride, Maggie, from destruction at the hands of Angelique continues its tormented course. Quentin was arrested for the murder of Bruno, and on this night, new complications arise as the search continues for the first murderer: the one who brought death to Angelique.

Angelique returns to Collinwood and informs Maggie that Quentin has escaped from jail.

Maggie now believes he is guilty, but expresses her desire to see him and speak to him. Despite Maggie's protests, Angelique insists that no matter what, Quentin would never harm anyone. Angelique thinks that seeing Quentin would be a bad idea for Maggie. She gets frustrated and heads to her bedroom.

At Loomis House, Julia breaks the news to Carolyn of Quentin's escape, but she doesn't seem to care that much. She reasons that although Angelique may be behind Bruno's death, there is still another murderer on the estate. They both puzzle over who the other murderer may be.

Upstairs at Collinwood, Maggie discovers the voodoo doll in her dresser. She shows it to Carolyn, who recognizes the scarf as Bruno's and identifies it as a possible murder weapon. Maggie suspects herself, but Carolyn insists she is not responsible and proposes "Alexis" as a suspect.

Carolyn returns to Loomis House and tells Julia about the voodoo doll that Maggie found. Carolyn is convinced that Angelique planted the doll in her room and that she killed Bruno. She wants to expose Angelique, but Julia feels it's too dangerous at this point in time. Julia changes the subject to the other murderer and starts asking many questions about the seance. Carolyn feels that anyone involved could be the murderer.

Back at Collinwood, Maggie notices that someone had been in her bedroom while she was briefly out. She strikes up the courage to ask Angelique about planting the voodoo doll in her dresser, but she denies knowing anything. The two wonder if Quentin might be in the house somewhere. Angelique leaves to go for a walk, but Maggie decides to stay behind in case Quentin comes back.

That night, as a storm rages over Collinwood, Maggie decides to go look for Quentin, but before she can do so, windows in the drawing room bang open, as do the front doors. Maggie then hears Angelique's song and she heads up to the East Wing.

Maggie arrives at Angelique's room in the East Wing, but the doors are locked. The music stops playing and the doors open just as Julia arrives. Maggie becomes paranoid over the fact that the doors were locked, but now there is no one in the room. Julia tells her it isn't safe for her to be in the house and suggests going to Loomis House for the night, but Angelique returns and tells Julia that she will keep Maggie company.

At Loomis House, Carolyn has a vision where she sees Angelique laying on the Collinwood drawing room floor, dead. She screams as Julia walks in. Carolyn claims to know who murdered Angelique.

Maggie: Why would he escape if he weren’t guilty? We’ve got to accept what we’ve known for a long time. Quentin killed Bruno. 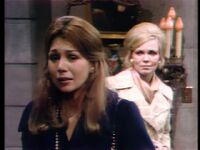 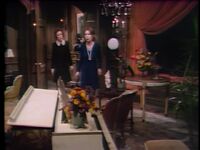 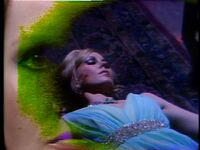