Quentin is arrested for the death of Bruno.

The great house at Collinwood in the strange world of Parallel Time. A world in which Barnabas Collins and Julia Hoffman must find a way to deal with a woman who is bent on destroying Collinwood and all who live there. On this night, in a cottage not far from the Great House, a part of her evil plan has been enacted by two men. Both men are unaware that they are merely being used as pawns in a scheme that will lead one to jail and the other to the grave.

The inspector examines Bruno and declares him dead. Quentin claims he didn't kill him. The inspector doesn't believe him or the story Quentin tells him, and Quentin is charged with "suspicion of murder." Quentin calls his lawyer.

Meanwhile at Collinwood, Angelique sneaks into the master bedroom and plants the voodoo doll she used to kill Bruno in Maggie's dresser.

Quentin is taken back to the main house where his charges are revealed to a stunned Maggie. Angelique arrives and expresses shock with the charge and declares Quentin innocent. This declaration speaks volumes to Quentin, as his own wife was speechless at the news. He sees doubt in Maggie's eyes and is deeply hurt by it, despite her protestations.

Before being taken away, Quentin is allowed to go up to his room and pack a few items. While there he discovers the voodoo doll with a scarf around its neck, hidden in Maggie's dresser. Inspector Hamilton wonders why he stopped packing, but Quentin tells him he wouldn't believe him even if he told him.

On his way out of Collinwood, Quentin tells Maggie to inform Daniel he is going out of town for a while. Convinced of his wife's guilt, Quentin goes to jail, although he is clearly more upset by his recent discovery than his own charges.

Barnabas visits Quentin in jail and lends his support. Quentin confides his suspicions to Barnabas. To Quentin's surprise, Barnabas fiercely defends Maggie and refuses to believe that she could be the one responsible for the trouble at Collinwood. Quentin assures Barnabas that he will be out of jail in the morning, and agrees to meet him in the evening.

Later that night at Collinwood, Julia is still upset at Barnabas for refusing to get rid of Angelique when they had the chance. Barnabas tells her that despite the past, they must now preserve Angelique's life, as she is the real killer. Her death would now mean Quentin's destruction. Barnabas tells her she must stay with Angelique as much as she can to avoid raising suspicion.

Meanwhile Angelique tries to comfort Maggie by telling her he will soon be free. Maggie confesses she needs time to think. Angelique pleads Quentin's case, saying that he loved his first wife far too much to have ever hurt her. Maggie does not find this comforting.

Back at the police station, the inspector informs Quentin that the autopsy confirmed Bruno's cause of death as strangulation. Quentin declares his innocence, but is charged with Murder in the First Degree.

Inspector Hamilton tells Quentin the police have also decided to re-open the investigation of Angelique's death, and they intend to exhume the body. This makes Quentin even more nervous (since the body no longer exists), which the inspector notices.

Barnabas returns to Collinwood and learns from Maggie that Quentin had his bail denied and he is being held on a murder charge. He insists that Quentin is innocent and that Maggie mustn't give up hope.

Angelique visits Quentin in jail and convinces Quentin to escape. Angelique starts screaming and when the inspector runs to her aid, Quentin attacks him and runs out the door.

Julia: If we had destroyed the body that we had found at Stokes' cottage, then Angelique would have been destroyed, too. And none of this would have happened. And Quentin wouldn't be in jail now, because Bruno would still be alive!
Barnabas: Well, alright. Perhaps we were wrong. 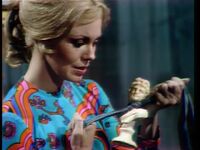 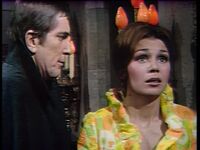 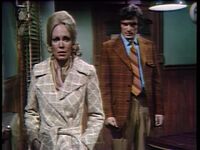 Angelique visits Quwntin
Add a photo to this gallery
Retrieved from "https://darkshadows.fandom.com/wiki/1041?oldid=143164"
Community content is available under CC-BY-SA unless otherwise noted.