A sudden mist from the sea now shrouds the great house of Collinwood as it exists in the world of Parallel Time. And within the darkness, a diabolical plot against Quentin and Maggie Collins begins to unfold as Angelique manipulates both people and events, so Quentin Collins will be charged with murder.

Bruno, frustrated with Angelique's lack of action, decides to call the police.

Bruno reports the murder to the police, but Angelique thinks it was a stupid idea because the journal does not offer enough evidence that Quentin is the murderer. While Bruno has his back turned, Angelique steals Bruno's scarf.

That night, Quentin returns to Collinwood and is mocked by Roger. Roger tells Quentin that he walked in on Bruno and Maggie about to kiss, and he wonders if anything else exciting will happen tonight.

Later, a man named Inspector Hamilton shows up at Bruno's cottage. He is surprised that Bruno wants to report more information on Angelique's murder. Bruno gives him a copy of the page from Cyrus' journal, revealing Quentin was the murderer.

At Collinwood, Maggie meets with Quentin in the drawing room and tells him that her earlier encounter was "drunken nonsense," but he is still upset about it. There is a knock on the door and Inspector Hamilton arrives, with questions about Angelique's death.

Inspector Hamilton shows Quentin the copy of the journal page and he is stunned with what he reads. Roger shows up and is also surprised to learn that Angelique was murdered. The inspector begins to ask many questions about the seance, but Maggie intervenes so she can talk to Quentin alone. Maggie wonders if Quentin really did murder Angelique, but Quentin says its nonsense. Angelique shows up and the inspector asks for the original journal.

Angelique admits that she has Cyrus' journal, but is positive that Quentin didn't murder Angelique because "he loved her more than anything." Quentin tells her stop talking about the past and demands to know how she obtained the journal. Inspector Hamilton reveals that Bruno made the call to the police and also knows the contents of the journal. Quentin isn't surprised that Bruno is involved and abruptly leaves the house "to go deal with Bruno." After he leaves, Angelique smiles and runs up to her room.

Maggie opens the drawing room doors and finds that Quentin is gone. While Maggie goes to search for him upstairs, Roger wonders if Quentin is going to Bruno's cottage. Inspector Hamilton also wonders the same thing, and decides to investigate.

Quentin shows up at Bruno's house, demanding to know how he obtained Cyrus' journal. Bruno refuses to divulge any information and Quentin attacks him. He eventually lets him go and tells him he has to be off the property by morning. As Quentin is about to leave, Bruno starts to choke. Meanwhile, Angelique is in her room at Collinwood, using Bruno's scarf to make him choke. Bruno collapses to the ground and Quentin goes to check on him. As he looks over him, the inspector arrives and tells Quentin he hopes for his sake that Bruno isn't dead.

Inspector Hamilton: If you’ll all excuse me, I’d like to ask a few questions about the seance during which the death took place. 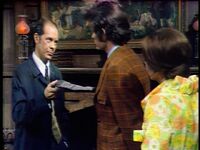 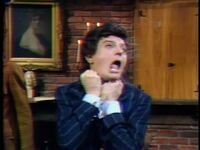 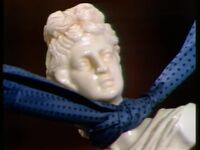