Barnabas is unable to kill the woman used as Angelique's life-force; as he attempts to revive her, Angelique becomes weak.

Collinwood in Parallel Time. And at last, Barnabas Collins has an ally to fight the evil of Angelique. For Julia has come from their own time and has saved his life. And now, masquerading as Hoffman she was forced to kill, she has discovered what keeps Angelique alive. The body in the hidden room in Stokes' cottage. So she and Barnabas, knowing they have little time, go to destroy the body and end Angelique's reign of terror on the great estate.

After seeing the body, Barnabas is instantly attracted to her and cannot bring himself to kill her. He asks her to see if she can revive the woman. Julia doesn't want to and feels it's much easier to just kill her, but Barnabas orders her to examine the body.

At Collinwood, Roger has joined Angelique and Stokes in the drawing room. Roger reveals that he now owns Cyrus' property and has come into a lot of money. After he leaves, Angelique reiterates her claim that everyone at Collinwood, except for Daniel, will be affected by what she is about to do.

Meanwhile, Julia tells Barnabas that her heartbeat is very low and she is on the brink of death, but somehow is still alive. Barnabas grabs her hand and he feels a response, and she eventually opens her eyes. As she wakes up, Angelique starts to feel weak at Collinwood. Stokes believes someone is in the room with the life force and immediately leaves. Meanwhile, Barnabas begs the woman to speak, but she is unable to. As they try to revive her, they hear the front door slam and realize Stokes has returned.

Barnabas disappears before Stokes shows up and he demands to know why Julia is there. She perpetuates a story that she had a premonition that Angelique was in danger and came to check on the body. Stokes appears to believe her story and goes to see if Angelique is alright.

At Collinwood, Maggie returns to Collinwood and Roger takes several jabs at Maggie for Quentin's latest disappearance. Roger begins to ask Maggie many questions about what happened, but Maggie stands up for herself and tells him to get out of "her" house.

Angelique goes to visit Bruno in his cottage. Bruno wonders if she took Cyrus' journal to the police yet, but Angelique isn't so sure that Quentin was her actual murderer and she needs more proof. Angelique's decision to not go to the police just yet upsets Bruno and he gets furious with her.

Angelique tells Bruno to never touch her again and says she can do whatever she wants with the journal since he sold it to her. She tells him that he needs to get over Angelique and set his sights on Maggie.

Bruno takes Angelique's advice and goes to visit Maggie. Maggie, perhaps in a trance, admits she that she enjoys Bruno's company. They two almost kiss, but Roger walks in on them and she comes to her senses.

Barnabas: I cannot do it.
Julia: Because she's beautiful?
Barnabas: In a world where there's so much ugliness, have I the right to destroy her?

Julia: Barnabas, in the past I always thought you knew what was best. But this time you are wrong.

Timothy: That's what I like about the Collinses. They have more manners than sense. They believe in their manners even if nobody else does.

Dark Shadows Everyday - Episode 1039 - Barnabas, Julia and the Lady in the Back Parlor 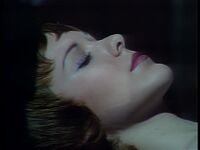 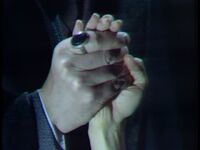 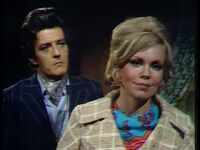 Bruno and Angelique
Add a photo to this gallery
Retrieved from "https://darkshadows.fandom.com/wiki/1039?oldid=142688"
Community content is available under CC-BY-SA unless otherwise noted.