Angelique tries to make Quentin believe that Maggie is a witch.

The great house at Collinwood in a strange and different time. A time that runs parallel with our own. A time in which people look familiar, but follow different destinies. For many months, there have been those who believe, but could not prove, that Angelique Collins' death was an act of murder. On this day not far from Collinwood, a young man's greed has accidentally led him to that proof of murder that has been missing for so long.

Bruno finishes reading Cyrus' journal and believes he can get a great deal of money for the information he now possesses. He picks up the phone and calls Angelique and says he knows who the murderer was at the seance.

Angelique demands to know who the murderer was, but Bruno refuses to give an answer over the phone. She invites him to meet her at Collinwood, to which Bruno agrees.

An hour later, Bruno arrives at Collinwood. Maggie greets him and Bruno says he is glad she has returned. Quentin sees him from the drawing room and is upset by his presence in the house. Bruno tells him he was invited by Angelique and heads upstairs. After he leaves, Maggie wonders why Quentin took Angelique to Bangor with him on his trip. Quentin wonders if she is jealous, but Maggie insists she isn't.

Bruno enters Angelique's room and demands $5,000 for the information in Cyrus' journal. Angelique reluctantly agrees, but Bruno asks for the money before he reveals the answer. She asks for two hours to get the money and he leaves.

That afternoon, Quentin and Maggie are sitting in the drawing room. Maggie is still troubled by her experience with Yaeger. Quentin tries to console her. As he tries to get her to relax, Angelique walks in through the front door and starts to eavesdrop. Maggie wonders if the disturbances have finally stopped. Angelique thinks to herself that she can turn Quentin against Maggie.

Angelique returns to her room with Bruno's money and he gives her Cyrus' journal. She reads the journal and is shocked at what she reads. The journal reveals that Quentin was the murderer by stabbing her with a hat-pin and Cyrus covered up her death by saying Angelique died from a stroke. Angelique isn't sure what to do next, but Bruno says if she doesn't go to the police or confront Quentin soon, he will, as he photocopied the journal before he gave it to her.

Later that night, Maggie is in her room and Angelique walks in with tea, claiming that "it will help her relax." While in her room, Angelique steals a piece of her jewellery.

Angelique returns to the drawing room and begins to perform a spell. At the same time, Maggie leaves her room in a trance and goes to Angelique's room. She picks up a necklace from the desk and returns to her own room. Angelique announces that this will be Maggie's "first attempt at witchcraft." Quentin walks in and nearly catches Angelique performing the spell, but as they are talking, Angelique pretends to choke and begs him to "stop the witch." After Quentin runs out, Angelique stops and smiles to herself.

Quentin rushes upstairs and storms into the master bedroom. Maggie is twisting around the necklace and Quentin grabs it from her. Quentin tells her he now believes that Maggie is the witch and is responsible for all of the bad things that have been happening at Collinwood.

Quentin: We all know that there was something wrong with Cyrus. But too many different things have happened to us recently. If he was responsible for all of those things, he wouldn’t have had time to do anything else.

Dark Shadows Everyday - Episode 1037 - The Things That Have Been Happening 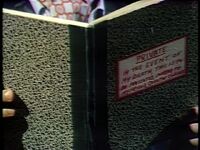 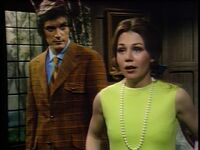 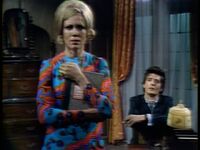