Julia arrives in Parallel Time and confronts her housekeeper counterpart.

Dawn has come to the strange and disturbing world of Collinwood in Parallel Time, but no amount of light can disperse the terrors that threaten all who live here. During the night that just ended, a treacherous woman learned the terrible secret of Barnabas Collins. And now she has come to Loomis House armed with the weapons necessary for his eternal destruction.

Hoffman enters Loomis House and prepares to drive a stake through Barnabas' heart.

Julia shows up from the standard timeline and strikes Hoffman over the head with a cane.

At Collinwood, William is searching for Hoffman, but can't find her. Angelique returns to Collinwood and wants to know everything that happened concerning Maggie and Yaeger, but William tells her to find out from Quentin and runs out of the house.

At Loomis House, Julia closes the secret room, but hears a knock on the front door. It's Bruno, and he wonders what "Hoffman" is doing there. He comments on her different appearance, but Julia is able to talk herself out of his questions. Bruno asks where William is, but Julia says he is sleeping. Bruno announces his intentions to leave Collinsport forever and he wants money from William. Bruno still thinks there is something different about her, but he decides to leave. Julia returns to the secret room and discovers that Hoffman is dead, not unconscious. She starts to panic because killing Hoffman wasn't her intention. Meanwhile, William returns and finds Julia.

William holds Julia at gunpoint, but Julia tries to explain that she isn't who he thinks she is. William goes into the secret room and finds Hoffman's dead body. Julia pleads with William that she came from the standard timeline and is a friend of Barnabas. William believes her story, but Julia feels terrible for killing Hoffman.

At Collinwood, Angelique phones Stokes and tells him she can't find Hoffman, but their conversation is interrupted by Bruno, who barges into the house. Bruno is searching for Quentin, however Angelique tells him that he is sleeping because he had a long night. When Bruno asks why, Angelique quickly fills Bruno in and the whole ordeal between Cyrus/Yaeger and Maggie.

Meanwhile at Loomis House, Julia is concerned about how the house will respond without Hoffman around, but then wonders if it might be a good idea to pose as Hoffman, if William can inform her on events that have been happening. William isn't so sure.

Bruno goes to Cyrus' lab to search for money.

That night, Julia, now posing as Hoffman, enters Collinwood and goes to Angelique's bedroom. She searches through drawers, looking for clues about what Angelique might know about Barnabas. Angelique walks in while she searches.

Angelique wants to know what "Hoffman" has found out about Barnabas, but she has no information and Angelique gets very upset with her. She orders Julia to continue to follow Barnabas around at all times.

At Cyrus' lab, Bruno breaks into the safe, but doesn't find any money. Instead he finds a journal that says "In the event of my death, please present unread to my friend Quentin Collins." Bruno begins to read the journal.

Julia returns to Loomis House and while she is shaken after her encounter with Angelique, she tells William that she doesn't know Barnabas' secret. She decides to continue to pose as Hoffman at Collinwood and help Barnabas.

Bruno finishes reading Cyrus' journal and excitedly claims to himself that he no longer wants any money, but the journal is worth more than he'll ever need. He phones Angelique and tells her he knows who the murderer was at the seance.

Angelique: Well...I see you still haven't lost your habit of entering without knocking.
Bruno: Oh, only because the people in this house have never gotten out of the habit of telling me I couldn't come in.

Julia (to Will): I'm doing it for Barnabas...not for Maggie. 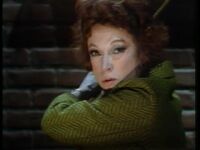 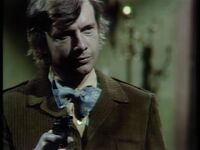 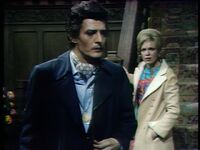 Bruno & Angelique
Add a photo to this gallery
Retrieved from "https://darkshadows.fandom.com/wiki/1036?oldid=142678"
Community content is available under CC-BY-SA unless otherwise noted.