Hoffman goes to Loomis House and prepares to stake Barnabas in his coffin.

The great house at Collinwood in the strange and frightening world of Parallel Time. In this time, Barnabas Collins has discovered forces more evil than he has ever known. For almost a week, Maggie Collins, the Mistress of Collinwood, has been held captive an in abandoned farmhouse by a man named John Yaeger. Most people have believed that Maggie simply went away, but Barnabas has been convinced that Maggie was abducted, and that she has been in terrible danger. On this night, he will learn how right he has been, when he meets John Yaeger for the first time.

Barnabas enters the farmhouse, but Maggie is hiding and he can't find her. After Barnabas leaves, Maggie tries to escape but is caught by Yaeger.

Yaeger says it's too late for her to go away with him and he prepares to choke her to death. Barnabas returns, much to the delight of Maggie, and orders Yaeger to let her go. Yaeger says that he doesn't have much time left, so nothing will stop him from killing her. Yaeger pushes Maggie against the wall, knocking her unconscious, and runs into the prison to get his sword-cane. He stabs Barnabas with the sword, but it misses his heart and Barnabas overpowers him and strangles him. After Yaeger dies, he turns back into Cyrus. Barnabas takes Maggie out of the farmhouse.

Carolyn arrives at Collinwood and informs Hoffman that Quentin will return within the hour. Barnabas arrives with Maggie in tow. Hoffman seems upset that Maggie is back. Barnabas confirms that Yaeger did indeed take her captive, but he is now dead.

Later that night, Quentin returns to Collinwood and Barnabas demands to speak with him immediately. Quentin wonders why no one has called a doctor yet and asks for Cyrus. Barnabas informs him that Cyrus is dead.

Quentin is shocked at the news and Barnabas offers to take him to the farmhouse. He wonders if Yaeger killed Cyrus, but Barnabas tells him that Yaeger is also dead. Quentin agrees to go to the farmhouse with Barnabas.

Later, Hoffman speaks with Carolyn in the foyer and wonders why Quentin returned without Angelique. Carolyn assumes he wanted to be back at Collinwood right away to help Maggie. Carolyn also wants to know why Barnabas left the house with Quentin, and feels that Barnabas knows more than what he is telling.

Hoffman goes to the East Wing and phones Angelique. She informs her that Maggie is back at Collinwood and Yaeger is dead. They both conclude that Barnabas killed him. Hoffman also tells Angelique she has information on Barnabas and that she needs to return to Collinwood immediately.

Barnabas takes Quentin to the farmhouse and explains that Cyrus and Yaeger were the same person. Quentin is frustrated that he never thought about it before, and realizes that they were never seen together and it makes sense that Cyrus wanted to change his will. Barnabas wonders how exactly they will tell the police, especially since he killed him. Quentin feels that it's best they tell the truth, and Barnabas appears to be ready to take that chance.

At Collinwood, Hoffman returns to the East Wing and sees Julia and Quentin from the standard timeline. Julia explains to Quentin that Barnabas went back to Parallel Time to help Maggie. As Hoffman watches from Parallel Time, Quentin says he hopes that no one in Parallel Time knows how to destroy vampires.

Hoffman goes to the drawing room to read on how to destroy a vampire. As she reads, Barnabas and Carolyn return to the foyer and Hoffman notices that he has no reflection in her compact mirror.

The next morning, Hoffman arrives at Loomis House with a stake and a hammer. She opens the secret room behind the bookcase and prepares to drive a stake through Barnabas' heart.

Yaeger: What kind of creature are you?
Barnabas: You will never know, Yaeger! 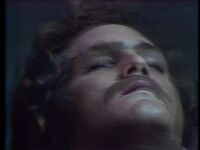 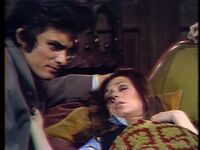 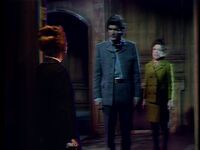