Cyrus transforms into Yaeger and returns to the farmhouse, ready to kill Maggie.

Collinwood in Parallel Time, and a night of horror and death. For Sabrina discovered Maggie Collins' jail and ran to Collinwood for help, not knowing that Yaeger was not far behind her. But before she could tell anyone or call the police, Yaeger killed her, as one sudden witness can testify.

After killing Sabrina, Yaeger attempts to kill Elizabeth, but she quickly closes the doors and locks him in the drawing room. In a panic, Hoffman tries to help Elizabeth call the police, but Yaeger escapes through the window and rushes back to the lab. Hoffman and Elizabeth enter the drawing room and see Sabrina's dead body. Hoffman tells Elizabeth she will go to Loomis House to phone the police.

Meanwhile, Maggie is still trying to escape from the farmhouse.

At Loomis House, Hoffman calls the police to send an officer to Collinwood. After she ends her phone conversation, she realizes she is all by herself in the house. She opens the secret room and discovers Barnabas' coffin. As Hoffman is leaving Loomis House, Barnabas shows up and demands an explanation as to why she is there. Hoffman explains that Yaeger has murdered Sabrina. The two rush back to Collinwood.

Yaeger arrives back at the lab and prepares to take the potion. He realizes that he is just about out of the potion. There is a knock on the door: it's the police. Yaeger quickly drinks what is left of the potion.

Yaeger turns back into Cyrus. He is now completely out of potion, and realizes that "this is the end" and decides to tell the police everything. He opens the door and lets the police officer in. The officer is looking for Yaeger, but Cyrus tells him he is gone. He informs Cyrus that Sabrina has been killed. Cyrus is visibly shaken by the news, and the policeman softens when he learns of their engagement. The officer informs Cyrus he is leaving another officer near his lab in case Yaeger shows back up.

At Collinwood, the police take away Sabrina's body. Barnabas tries to console Elizabeth and wonders who Sabrina was trying to call before she was killed, and if it has something to do with Maggie.

Cyrus, feeling bad for what he has done, calls Barnabas and tells him where Maggie is, and then prepares to commit suicide. Before he puts the pistol to his head, he feels the transformation beginning to take place once again.

Elizabeth informs Hoffman of the latest developments with Maggie. She is worried about Barnabas being by himself, but Hoffman thinks Barnabas will be able to take care of himself.

At the farmhouse, Maggie frees herself, but hears a door from upstairs slam and she hides in the closet. Barnabas arrives, but Maggie is nowhere to be found. Having been unsuccessful, Barnabas decides to leave. Maggie tries again to sneak out, but Yaeger catches her and prepares to kill her.

Barnabas: There are so many questions about Maggie, but the one that interests me the most is: Where is she? 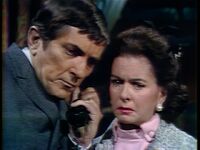 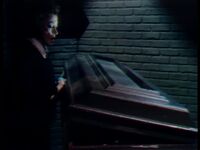 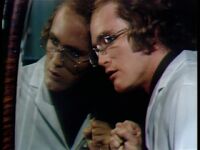 Split Personality
Add a photo to this gallery
Retrieved from "https://darkshadows.fandom.com/wiki/1034?oldid=142663"
Community content is available under CC-BY-SA unless otherwise noted.