Barnabas realizes there is a connection between Cyrus and Yaeger.

Collinwood as it exists in the disturbing world of Parallel Time, where Barnabas Collins has deliberately returned to continue his search for Maggie Collins. On this night, however, the danger to his own existence increases as the treacherous housekeeper, Hoffman, follows him to Loomis House at the bidding of Angelique, in an attempt to discover the secret that lies at the source of his power.

Hoffman follows Barnabas back to Loomis House and sees him enter the secret room behind the bookcase.

Hoffman decides to wait until Barnabas is out of the house before she investigates the secret room. Meanwhile, Barnabas closes up the room and leaves the house.

At the farmhouse, Maggie is still trying to break out of the cellar before Yaeger gets back, but she is not having any luck.

Elizabeth goes to visit Sabrina at the lab. Sabrina is worried that she hasn't heard much from Cyrus lately and wonders where he could be. Elizabeth invites her to stay at Collinwood for the time being, but she politely declines the offer. Yaeger shows up at the lab wanting to "go over data" with Sabrina. He is very polite to Elizabeth, but once she leaves he becomes furious with Sabrina for letting her into the lab. Yaeger orders Sabrina to send all of his clothes to New York and he writes himself a check from Cyrus' checkbook which will put all of his money in Yaeger's name. Sabrina begs him not to leave, but Yaeger tells her it's time to get over Cyrus and move on with her life. He leaves, and she follows him.

Elizabeth returns to Collinwood and Hoffman greets her. Hoffman asks her if she has seen Barnabas around the estate, but Elizabeth informs her that he is out searching for Maggie. Hoffman claims that Barnabas is a little strange and wonders why Quentin didn't check his background more before he allowed him into the house. Elizabeth gets upset because Barnabas is a Collins, and being a Collins gives him integrity. After Hoffman leaves, Elizabeth thinks to herself that Hoffman is right: Barnabas does seem a little strange. Elizabeth falls asleep in the drawing room and has a dream. She is walking through Cyrus' lab with Sabrina. The lab has been completely ransacked. Sabrina looks on the bench and sees Maggie dead. Elizabeth wakes up and rushes out the house.

At the farmhouse, Maggie finally escapes but is caught by Yaeger.

Maggie denies trying to run away, but Yaeger finds the metal stick she used to break open the door. Yaeger grabs her, puts her on a chair, and ties her up. Unknown to either of them, Sabrina has followed Yaeger and sees everything. Yaeger tells Maggie he is going to kill Quentin.

Elizabeth goes to Loomis House to see Barnabas. She tells him about her dream she just had. Barnabas discovers that Elizabeth met Yaeger, and she sensed a great deal of evil about him.

At the farmhouse, Yaeger beats Maggie and puts her on the bed. Sabrina decides to sneak out, but while doing so, drops the check that Yaeger gave her earlier. Yaeger realizes that Sabrina followed him and she knows everything.

Barnabas goes to Cyrus' lab and begins to investigate. He wonders what the connection is between Cyrus and Yaeger.

Sabrina rushes to Collinwood and yells out for Quentin and Elizabeth, but neither of them are there. She goes to use the phone, but Yaeger shows up and disconnects it. He pushes her into the drawing room and shows her the check that she dropped at the farmhouse. Sabrina pleads with Yaeger to let Maggie go, but he says that's not an option. Yaeger tells Sabrina that since she knows all about his plans, she will need to be "taken care of." He begins to strangle her as Elizabeth walks in.

Barnabas: Not even the jaw of the wolf itself is more devastating than this cane when it's in my hands. 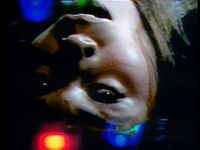 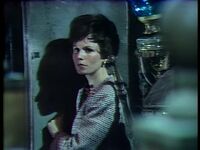 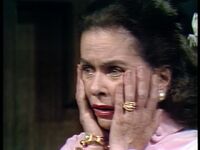 Elizabeth
Add a photo to this gallery
Retrieved from "https://darkshadows.fandom.com/wiki/1033?oldid=143982"
Community content is available under CC-BY-SA unless otherwise noted.