Yaeger forces Maggie to write a farewell note to Quentin.

A stormy night on the great estate of Collinwood. The night which will long be remembered, though the inhabitants of the house do not yet realize it. For Maggie Collins has run from the house after a fight with her husband, and has gone to meet Cyrus Longworth, only to find John Yaeger waiting. And Yaeger has carried her off to a deserted farmhouse by the sea.

Yaeger locks Maggie in the basement of the farmhouse.

Yaeger brings Maggie a celebratory dinner with champagne. Maggie realizes that he has been planning her capture far in advance, considering the presence of many of her personal items. Maggie begs to be released but Yaeger insists she will soon adjust. Maggie warns him that Cyrus will eventually come for her, which amuses Yaeger. Maggie refuses the offered meal, and Yaeger decides to lock her back up.

At Collinwood, Elizabeth and Angelique are incredulous that Quentin would let Maggie leave the house in the storm. Angelique explains that Barnabas tried to stop Maggie but was unsuccessful. Elizabeth muses that perhaps Maggie and Quentin are unhappy with each other and need time away from one another. As the two talk, Angelique sees Yaeger outside the window, who beckons to her to come outside. Angelique quickly excuses herself, and Elizabeth goes to "talk some sense" into Quentin.

Outside on the terrace, Yaeger expresses regret about his decision to kidnap Maggie, thinking that she will never love him. Angelique tells him that if he successfully convinces her that she no longer has a future at Collinwood, she will turn to him.

At the farmhouse, Maggie searches for a way to escape.

Yaeger returns to Maggie's prison with a pen and paper. Threatening her with the sword hidden in his cane, Yaeger forces Maggie to write a letter to Quentin saying she never wants to see him again.

The next morning, Elizabeth phones Maggie's sister in New York, but she has not heard from her. Roger observes the house would probably be better off without Maggie. As the two talk, Angelique again feels the chill of death while walking down the staircase. In the drawing room, Roger notes that Angelique stands before the fireplace "the same way Angelique used to." Desperate for warmth, Angelique begs Roger to hold her.

Angelique is interrupted by Elizabeth as she is about to kiss Roger and steal his warmth. As Angelique flees the room, Roger remarks on the feeling of extreme cold that has suddenly come over him, "as though he had touched death."

Angelique visits Stokes and begs for help. He doesn't exactly have a solution for her, but explains he went to great lengths to bring her back to life, and confesses that he did not do it unaided. Indicating that the answer lies behind a hidden door in his house, Angelique eagerly prepares to open it.

Yaeger: You know, Maggie, I seem to be more confident in my charms than you are. You’re going to love me! I promise you that. 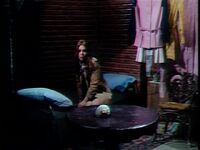 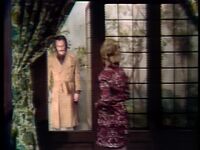 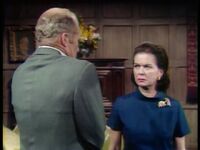