Yaeger kidnaps Maggie, hiding her at the farmhouse.

Collinwood in Parallel Time, and this night, a child has had an overwhelming premonition of disaster. But Maggie Evans does not listen. Not knowing that Cyrus Longworth, driven by his unrequited passion for her, has changed into John Yaeger. And has found a prison for her. A prison to keep her in until she loves him.

Yaeger, pretending to be Cyrus, phones Maggie at Collinwood and tells her he needs to see her alone. She reluctantly agrees to meet him at Widows' Hill. As soon as she gets off the phone, Quentin walks in and demands to know who she was talking to.

Maggie lies and says it was Sabrina who was on the phone. Quentin wonders if Cyrus and Sabrina are having a fight, and perhaps they should intervene. Maggie dodges Quentin's questions and mentions about how some of her personal items are missing. Quentin doesn't seem to be too concerned and is sure they will show up soon.

Downstairs, Angelique walks into the drawing room and sees Barnabas. Barnabas is there to see Quentin, which makes Angelique wonder if he is going to rat her out. After Barnabas says he won't, she starts talking about the idea of Parallel Time and immediately accuses him of coming from a different band of time. Barnabas, although nervous, denies all of her claims. Thankfully for Barnabas, Quentin arrives and kicks Angelique out. Alone with Quentin, Barnabas tells him he knows for a fact that there is a spirit at Collinwood and Maggie is in danger. In response, Quentin finally admits that he thinks Maggie might be practicing witchcraft. Angelique, who is eavesdropping outside the foyer, quickly hides as Barnabas heads upstairs. After he is out of sight, she rushes into the drawing room and into Quentin's arms, claiming that all she wants is peace at Collinwood.

Meanwhile, Yaeger is just about ready to put the final touches on Maggie's prison, but decides there might be a few other things she needs.

Yaeger sneaks into Collinwood and steals some of Maggie's clothes.

In the drawing room, Maggie tells Quentin she has "an errand to run," but Quentin stops her and scolds her for telling Barnabas about her experience in the East Wing the other night. Maggie says Barnabas was willing to listen to her, but Quentin gets upset and leaves.

Back in the master bedroom, Yaeger is just about ready to leave, but is caught by Angelique. Angelique recognizes him and tells him she has been eager to meet him. Yaeger doesn't seem to be interested in talking to her, but Angelique tells her she knows they have similar interests. She demands to know what his plan is.

Downstairs, Maggie tells Barnabas about her most recent fight with Quentin. Barnabas tells Maggie that "Alexis" is her enemy and she must not be trusted. Maggie is startled by this news, but Barnabas tells her to be very careful.

In the master bedroom, Yaeger confesses he is madly in love with Maggie, likewise with Quentin for Angelique. Angelique agrees to help Yaeger by "making Maggie hate Quentin."

Later that night, Maggie returns to her bedroom and hears Angelique's voice. As Angelique performs a spell in the drawing room, she beckons Maggie to leave Collinwood forever. Quentin rushes into the room and Maggie asks him if he can hear Angelique.

Quentin doesn't hear anything and tells Maggie there is no one else in the room. Maggie gets frustrated and runs out.

As a storm begins to rage outside, Maggie runs out of the house, despite Barnabas trying to stop her from leaving. She arrives at Widows' Hill and Yaeger sneaks up behind her. He captures her and locks her in the basement of the farmhouse.

Maggie: I just don't understand it.
Quentin: Maggie, I hate that phrase. Everyone who mentions it automatically begins to start talking about the supernatural.

Angelique (to John Yaeger, in Maggie's room): Can the second Mrs. Collins know that you're here? Is it possible that she has a secret life? Ha ha ha ha. Oh, what fun! 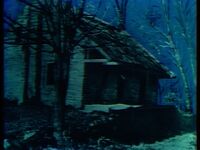 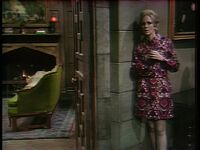 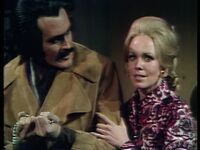