Parallel Time on the great estate of Collinwood, and a new danger threatens. Cyrus Longworth, driven by his own uncontrollable passion for Maggie Collins, has changed into John Yaeger without the aid of his drugs. And Sabrina has witnessed the change. Unable to stop Yaeger from leaving the laboratory, she is left not knowing where he is going; not guessing what tragedy his actions will eventually cause.

In the middle of the night, Yaeger sneaks into the master bedroom at Collinwood while Maggie is asleep.

Yaeger lingers over Maggie as she sleeps and wonders where he could take her. While he stands over her, the phone rings. Quentin is calling, wondering where Cyrus is. Maggie doesn't know, but it is implied that Sabrina is very worried. She offers to go to the lab, but Quentin tells her to stay at Collinwood in case he shows up. After the phone conversation ends, Daniel walks in, looking for Quentin. Maggie tells him he is at Cyrus' lab. Daniel explains to Maggie that he saw a strange man approach the house, but then he disappeared. Maggie and Daniel leave the room and Yaeger comes out. He steals Maggie's hairbrush and sneaks out the window.

Later that night, Yaeger returns to the lab and catches Sabrina going through Cyrus' notes. Yaeger taunts Sabrina and tells her that Cyrus is bored with her, and has now permanently changed to Yaeger. Sabrina is sure that he can change back into Cyrus. Yaeger admits that he killed Horace and warns her to keep her mouth shut; otherwise she will be his next victim.

Yaeger explains to Sabrina he killed Horace because he was blackmailing him. Sabrina hates herself for being involved with the experiments, but pleads with Yaeger to turn back into Cyrus. Yaeger tells her that if she really loves Cyrus, she will have to go do everything he says.

The next morning, Maggie notices that several personal items are missing from her room. Daniel gives her a seashell to thank her for listening to him the previous night.

Meanwhile, Yaeger is meeting with a young owner of an old farmhouse that he is interested in renting. Yaeger agrees to rent the farmhouse and will begin moving in that night.

That afternoon, Daniel tells Maggie that he can't find any of the things she is missing. He tells her that he has a feeling that "something terrible is about to happen."

That night, Yaeger has set up a bedroom in the basement of the farmhouse he has rented. He puts Maggie's hairbrush on the desk. The owner of the farmhouse visits Yaeger on his way out of town and asks him questions about what exactly he'll be using the house for. He notes that the room doesn't look like a lab to him, and Yaeger admits he is going to use the room as a prison. The owner doesn't believe him at first, but Yaeger says the farmhouse is going to become a dungeon and he kills him with his sword-cane.

At Collinwood, Maggie wishes Daniel goodnight, and Daniel admits that perhaps he can be friends with her after all. After Daniel leaves, the phone rings. It's Yaeger, but he's posing as Cyrus. He asks to meet with her in private at Widows' Hill. Maggie seems skeptical of the rendezvous, but she finally agrees to meet with him.

Yaeger: I've got too much to do that Cyrus was afraid to do.

Daniel: Maggie, you've been here long enough to know that things happen around here, strange things. They do. I know it. Sometimes before they happen, I get...a feeling. 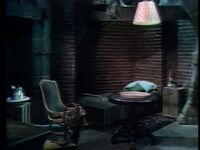 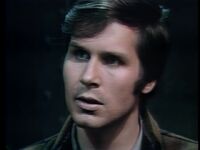 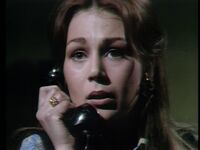 Hanging on the Telephone
Add a photo to this gallery
Retrieved from "https://darkshadows.fandom.com/wiki/1028?oldid=142655"
Community content is available under CC-BY-SA unless otherwise noted.