Cyrus transforms into Yaeger in front of Sabrina.

The great house at Collinwood, in the strange and disturbing world of Parallel Time. It is here that Barnabas Collins has been witness to an ever-growing mystery, concerning the true identity of Alexis Stokes. And on this night, he will ask a terrifying question, which will bring an even more terrifying answer. An answer that will endanger his own existence.

Barnabas uses the portrait to see into the eyes of the true Angelique, causing Alexis/Angelique to feel a burning sensation in her own eyes. Rushing to find the source of the attack, Angelique's true identity is revealed to Barnabas.

Angelique is shocked that Barnabas has discovered her secret and recognizes that he is a supernatural being. Barnabas vows to prevent Angelique's plan to reclaim Collinwood.

After Barnabas leaves, Angelique phones her stepfather, Timothy Stokes, and tells him to come to Collinwood. Thinking she is Alexis, Stokes wants nothing to do with her, but she tells him she has information regarding Angelique, and he agrees to meet her at Collinwood.

As Barnabas is leaving Collinwood, Quentin finally returns and asks where Maggie is. Barnabas tells her she is in her room. Before he leaves, Barnabas asks Quentin if he ever met Alexis before she showed up at Collinwood, and Quentin says he hasn't.

Stokes meets with Angelique in the East Wing at Collinwood. Angelique reveals her true identity to him, and the two embrace. Angelique informs him that she is threatened by someone named Barnabas Collins, and he has strange powers. She also explains that she has seen strange things happening in her room, including different people and the room being empty one second, and normal the next. Stokes recognizes that she is witnessing "Parallel Time" and deduces that the East Wing is a portal between two different worlds.

Quentin enters the master bedroom and watches over Maggie as she sleeps. She awakens and is surprised to see that he has returned.

Maggie is delighted to see Quentin has returned, but Quentin is still visibly upset. Quentin asks why she wore that particular dress and Maggie says it is because "Alexis" and Hoffman suggested it to her. Maggie confesses she nearly jumped to her death because Angelique's portrait was tormenting her. Quentin is startled by this revelation, but then tells Maggie he wants to "start all over" with her.

Just before dawn, Stokes sneaks into the Loomis House and finds Barnabas' cane. Barnabas appears and demands to know who he is, and Stokes introduces himself as Angelique's and Alexis' stepfather. Stokes suspects from Barnabas's reaction that the two have met before. Barnabas manages to get rid of him just before the sun rises.

Meanwhile, Sabrina is with Cyrus at the lab. Sabrina feels that their relationship has been suffering and asks if there is someone else he might be interested in. Cyrus denies it and there is a knock on the door. Maggie arrives and asks for help regarding Quentin. Cyrus feels that perhaps Quentin will always have a place in his heart for Angelique. As the two talk, Cyrus starts to feel pain and orders Maggie to leave. Maggie leaves and Sabrina rushes in just in time to see him transform into Yaeger.

Sabrina is stunned at what she has just seen, but tells Yaeger that she loves him no matter what. Maggie then returns and Yaeger orders Sabrina to cover for him. Quentin also arrives, wondering if he can see Cyrus and is surprised to see Maggie there. Sabrina fabricates a story of Cyrus going to meet with a friend and he won't be back for a while. Quentin demands to know why Maggie is there in the first place and Maggie tells him she was telling Cyrus about her experiences in Angelique's room the previous night. Quentin gets upset hearing her same story again and leaves the lab.

That night, Barnabas arrives at Collinwood and asks Quentin how he has been getting along with Maggie. Quentin hopes that after a few days of rest she'll start feeling better. Quentin is leaving to go visit Cyrus and Barnabas offers to go with him. After they leave, Yaeger sneaks into Collinwood and enters the master bedroom, while Maggie sleeps.

Angelique: (to Barnabas) Who are you? What are you? 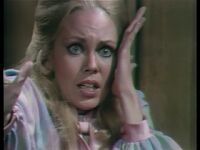 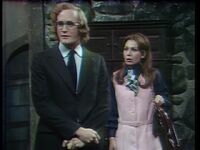 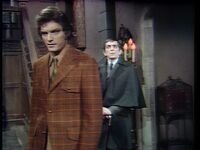