Hoffman and Angelique trick Maggie into wearing Angelique's dress to a costume party.

Collinwood in Parallel Time, and Maggie Collins is struggling desperately to preserve her marriage to Quentin. But she does not know that his first wife, Angelique, is returned from the dead, assumed the identity of Alexis, the sister she murdered, and is determined to have Quentin as her own. This night, to further her plans, Alexis has caused Maggie to have a dream about a hidden drawer in which Quentin's secret is concealed. And now Maggie sets out to discover if the dream is true.

Maggie has a dream in which she is led to Angelique's room, where she finds love letters from Quentin hidden in a secret compartment. She wakes up and finds them.

Maggie shuffles through the love letters which Quentin had written to Angelique before they were married. She opens one up and begins to read it.

Meanwhile, Angelique still beckons to Maggie through the flames in the drawing room, when she is interrupted by Barnabas, who immediately becomes suspicious. Angelique dodges his questions by changing the subject to Maggie and Quentin's fight.

Quentin finds Maggie in the East Wing reading the letters.

Quentin, furious with Maggie, refuses to believe her explanation that she came to the East Wing in an attempt to "understand Quentin," but he only becomes more confused and angry, ejecting her from the wing.

Downstairs, Barnabas questions Angelique about her "sister" during a game of chess. Elizabeth interrupts and asks for help with the costume ball.

In the master bedroom, Maggie again apologizes to Quentin, but further compounds her mistake by mentioning the fact that it's his wedding anniversary with Angelique. He again gets very upset.

Quentin runs downstairs and demands that the costume party be canceled, and he storms out of the house despite Barnabas chasing after him. Maggie comes downstairs in a very distraught state. Barnabas offers to help her, but Maggie is inconsolable.

The next day, Maggie asks Hoffman why there is a costume party every year. Hoffman says it's something that Quentin always enjoyed having. Quentin returns and tells Maggie he wants to forget everything that has happened and have a relaxing evening at the costume party.

Upstairs, Hoffman, Maggie, and Angelique are discussing what to wear at the party. Angelique shows Maggie a dress and convinces her to wear it.

That night, Maggie comes down the stairs and Quentin sees the dress she is wearing. He gets incredibly upset and leaves the house.

Barnabas (to Maggie): Let me help you. 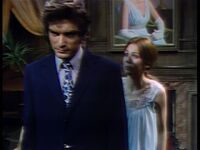 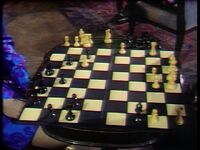 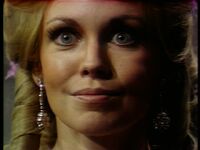