Maggie meets Yaeger on the docks. He reveals details about the seance in which Angelique was killed.

Collinwood in Parallel Time. Its stone towers rising into the night's sky, proud and apparently invulnerable. On this night, however, the power of the living dead shapes a dream in the mind of Maggie Collins that points to not only death, but murder.

Maggie awakens screaming after a dream in which Quentin strangles Angelique during the séance.

Quentin rushes into the master bedroom and calms Maggie down, although her initial reaction to him is fear. After Quentin leaves, Maggie attempts to rationalize the nightmare, reassuring herself that Quentin would never commit murder.

Later, in the drawing room, Angelique opens a book titled "The Seventh Level of Witchcraft," but quickly hides the book, when Maggie approaches. Maggie remarks that the room is set up in the same way it was in her dream, the night of the séance. Maggie becomes hysterical once again, and Angelique relates an untrue rumor that Bruno and Angelique had been having an affair at Collinwood. Angelique is visibly satisfied with the effect on Maggie.

The next morning, Quentin expresses anger that Elizabeth plans to hold the annual costume ball at Collinwood, despite the recent trouble. Angelique tries to convince Quentin that holding the ball is an opportunity for everyone to meet Maggie, but Quentin is firmly opposed to the idea.

Maggie visits Cyrus with further questions about Angelique's death, clearly growing more unstable and increasingly confused. Cyrus has a soothing effect upon her. Maggie leaves her gloves behind at the lab, and after she has gone, Cyrus holds them lovingly to his face.

Later that evening, Buffie visits Cyrus in his lab, demanding to know Yaeger's location. Cyrus tries unsuccessfully to get rid of her, but Buffie notices Maggie's gloves. Buffie angrily removes the necklace Yaeger gave her and orders Cyrus to return it to Yaeger.

Quentin finds Maggie reading Angelique's book on witchcraft, which makes him even more angry. Quentin demands the "obsession with witchcraft at Collinwood" end immediately and storms out. Cyrus then appears, returning Maggie's gloves. Maggie offers him a drink, but he nervously leaves.

Cyrus quickly returns to the lab and contemplates taking the potion to turn into Yaeger so he can pursue Maggie's affections. He tries to resist, knowing that Maggie is married to his best friend. But he realizes that Yaeger "has no limits" and takes the potion.

The next morning, Maggie receives a phone call at Collinwood from Yaeger. He invites her to meet him later that evening and says he has information regarding two séances at Collinwood. Maggie tries to pretend she doesn't care anymore, but Yaeger insists she meet him at the docks at 6PM.

That night, Yaeger waits for Maggie's arrival, but Buffie shows up instead. Buffie is on her way to work at the Eagle Tavern, and Yaeger "thanks" her for returning the necklace. He mocks her and she ends up leaving. Moments later, Maggie finally shows up and Yaeger, without introducing himself, tells her that Quentin strangled Angelique. He then grabs Maggie and plans to take her away. 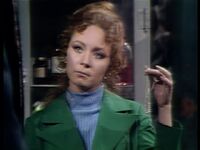 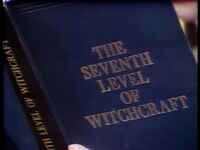 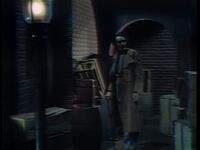 At the Docks
Add a photo to this gallery
Retrieved from "https://darkshadows.fandom.com/wiki/1022?oldid=142647"
Community content is available under CC-BY-SA unless otherwise noted.