Maggie has a bizarre dream in which Quentin murders Angelique.

This is the Collinwood of Parallel Time, in which Barnabas Collins is trapped, and into which he has brought his terrible curse. On this night, helpless against the dark forces that control his fate, he will find an innocent victim, who will not only add to his grief and guilt, but also to his immediate peril.

Buffie brings Barnabas to her apartment. The two embrace and Barnabas bites her. Soon after, there is a knock on the door and Cyrus walks in, noticing Buffie's unconscious body on the floor.

Barnabas tells Cyrus he heard Buffie scream and entered to investigate. Under Barnabas's power, Buffie tells Cyrus she thought she saw someone at the window and fainted. Cyrus, seeming to believe her story, leaves. Buffie has many questions for Barnabas, but, realizing she is under Barnabas's control, swears her allegiance to him. Barnabas leaves, but promises they will see each other again soon.

The next morning, Maggie reluctantly asks Quentin why she was never told that Angelique was murdered. Quentin, visibly upset, refuses to discuss the matter further.

Angelique, displaying renewed vigor, arrives with a bouquet of flowers for Maggie. Maggie accepts them with gratitude and lays them on the table. Cyrus then arrives and informs Quentin that Larry's autopsy results show that he froze to death, and he is perplexed at how low his body temperature was.

Angelique, returning to the foyer, casts a spell over the flowers, and making them appear frozen and withered.

Quentin wonders if Larry's death may have also been the result of witchcraft, but Cyrus isn't sure. Cyrus leaves, and Quentin notices the dead flowers on the table. Maggie and Angelique soon arrive and wonder what could have happened. Angelique draws attention to the fact that the flowers were perfectly fine a few minutes earlier before Maggie held them, and the implication stirs Quentin's imagination.

Later, Cyrus visits Buffie to make sure she is alright. Buffie is annoyed by his presence and asks him to leave. Before he can go, Buffie asks if Cyrus has heard from Yaeger. Cyrus is intrigued, but says he hasn't been in Collinsport lately. Cyrus leaves, and Barnabas appears. Barnabas orders Buffie to find out everything she can about Yaeger.

Angelique visits Maggie in the drawing room at Collinwood and begins discussing the murder at the séance. She leads Maggie to suspect that Quentin may be the murderer, since he continues to deny that her death was the result of murder.

Quentin and Maggie are in the master bedroom, and Maggie tells Quentin she is glad to be back at Collinwood with him. Quentin apologizes for getting upset at her earlier in the morning, and Maggie goes to bed while Quentin heads downstairs to finish some work.

Meanwhile, Buffie invites Cyrus to her apartment. Buffie tells Cyrus that she has things that belong to Yaeger and she wants to give them back to him so she no longer has to see him. Cyrus informs her that if she waits long enough, she will be seeing Yaeger "very soon." After Cyrus leaves, Buffie wonders why it seems like he is protecting Yaeger.

At Collinwood, Maggie has a dream about the séance at which Angelique was murdered. In the dream, Quentin breaks the circle and strangles Angelique. Maggie wakes up and screams, "No, Quentin! She was your wife!"

Cyrus (having just found Buffie unconscious): What happened?
Barnabas (who's just attacked Buffie): I don't know! I had just left her after taking her home, and when I heard her scream, I came rushing in here and found her just like this! 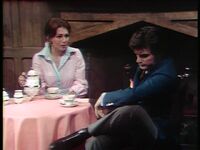 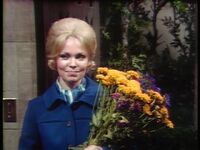 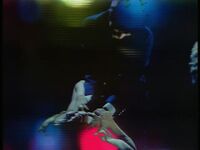