Parallel Time on the great estate of Collinwood. On this night, a dead woman finds a plot to separate a husband and a wife interrupted, for she feels herself getting colder and colder. And she knows she must steal all the warmth from another's body if she is to evade the eternity of the tomb.

As Angelique continues to lose warmth, she declares that the next person to enter Collinwood will be her next victim. The door opens and Larry walks in.

Chase has come to meet Quentin, but Angelique tells Chase that Quentin is out with Maggie for the night. Angelique asks him to hold her, and she drains his warmth. William walks in moments later and finds his dead, ice cold body, while Angelique feigns shock at his collapse.

In the lab, Cyrus contemplates transforming into Yaeger again so that he can see Buffie. Before he can take the potion, the phone rings. William informs him of the mysterious death of Larry Chase. As Cyrus hangs up the phone, relieved, and heads to Collinwood.

There, Barnabas, William, and Angelique are discussing what to do next. Barnabas is suspicious about Angelique's role in Larry Chase's death. Cyrus examines the body and voices further suspicions.

Barnabas finds himself at the Eagle Tavern and introduces himself to Buffie. Buffie seems attracted to him as the two converse. Cyrus soon walks in and asks Buffie if she has seen Yaeger recently. Buffie says she hasn't; she is confused by his questions. Cyrus offers Barnabas a ride back to Collinwood, but he politely declines and leaves. Moments later, Barnabas and Buffie embrace, but he resists the urge to bite her.

Cyrus returns to Collinwood to inform William and Angelique that he is awaiting the results on Larry's autopsy. William decides to go to The Eagle for a drink, and Cyrus tells him that Barnabas is there with Buffie. William becomes very nervous and runs out of the house.

William rushes to The Eagle and asks Buffie where Barnabas is. Buffie informs him that he will be back before closing time, and asks why is in such a panic. Barnabas appears in the room, also pointedly inquiring about William's discomfort.

Barnabas puts William in a trance and orders him to leave. Buffie closes down the bar and leaves with Barnabas.

William visits Cyrus at his lab and asks questions about Yaeger and Cyrus's experiments. Cyrus explains that he has always been the well-mannered one and Yaeger has all the fun. William suggests Cyrus take a break and "have fun" himself for a change. The idea appeals to Cyrus.

Barnabas and Buffie return to her apartment. The two embrace, and Barnabas bites her, but they are interrupted by a knock on the door. It is Cyrus, who sees Buffie lying helpless on the floor.

Angelique (to Larry, as she is about to kill him by stealing his warmth): Oh, I feel so warm in your arms. Kiss me. 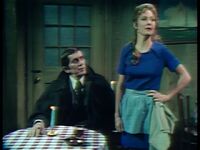 Buffie at the Bar 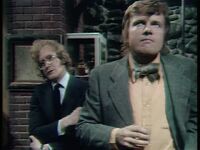 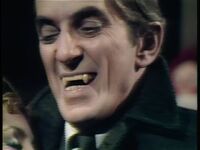