Cyrus examines Quentin and can no longer find anything wrong with him, suggesting that he has been the victim of voodoo.

The great house at Collinwood as it appears in the strange and terrifying world of Parallel Time. By way of a warp in time, Barnabas Collins found himself in this mysterious world in which people who look familiar are actually strangers following different and sometimes frightening destinies. But Barnabas' own life remains unchanged; he still carries with him the curse that has haunted him for almost two-hundred years. And on this night, the lust for blood is upon him and he is unable to resist it. In the master bedroom of the great house, the mistress of Collinwood sleeps peacefully, unaware of the terrible danger she is in.

Maggie awakens to find Hoffman in her room. Hoffman claims to have heard a prowler, but Maggie doesn’t believe her.

In the meantime, Cyrus Longworth finishes his examination of Quentin and concludes that, despite his symptoms, Quentin is perfectly healthy. Cyrus suspects a supernatural presence at Collinwood has made an attack on Quentin. Quentin dismisses his theory as nonsense.

Maggie is troubled while she waits for Quentin. Barnabas happens upon her and decides to keep her company. Maggie confesses that she has felt unwelcome in the house since her arrival, but appreciates Barnabas's friendship.

When Quentin returns, Maggie asks him to dismiss Hoffman. Quentin refuses to fire Hoffman without cause, just as the woman herself enters the room. Hoffman confesses that she and Maggie have not gotten along, but attributed it to a personality clash that might soon settle. Maggie accuses Hoffman of loyalty to Angelique, which Hoffman does not deny. Quentin acts as peacemaker and tells the women to forget the situation, and make a clean start in the morning.

Upstairs, while Quentin and Maggie get ready for bed, Quentin discovers a doll in Maggie's suitcase.

Cyrus (to Quentin): Now, the symptoms appear to me, the way the attack came upon you so suddenly, the way it appeared without any reason whatsoever, without any warning, that this must have been caused by something...something supernatural! 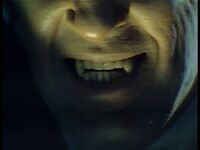 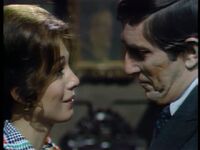 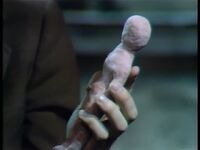