Maggie returns and Quentin warns her it is not safe for her to stay at Collinwood.

Collinwood in Parallel Time, and an unknown evil exists in the great house. For Quentin's first wife has returned from the dead and taken the identity of the sister she murdered. And to win Quentin back to her, she must make Maggie come back to the troubled estate, and so she resorts to very dangerous black magic. Magic she is not certain she can control.

As Barnabas and Quentin argue in the drawing room, Angelique places a pin in her voodoo doll, and Quentin collapses in pain.

Elizabeth walks in, wondering who Barnabas is, and Quentin asks for Cyrus. Elizabeth calls Cyrus on the phone, who is on his way. Quentin tells Angelique he thinks he is dying, and asks for Chris so he can get his will. Meanwhile, Barnabas explains to Elizabeth who he is and Cyrus finally arrives. Cyrus orders everyone out of the drawing room so he can properly examine him. While waiting for Cyrus to return, Angelique suggests calling Maggie to let her know what has happened. Moments later, Cyrus returns and determines that Quentin is near death and he doesn't have much time.

Angelique rushes to the attic and pulls the pin out of the voodoo doll, which brings more pain to Quentin.

After talking with Barnabas about Quentin and his relationships, Elizabeth decides to call Maggie and tell her what has happened. Back in New York, Maggie is composing a letter to her estranged husband. She believes that his long silence means that he has given up on their marriage. She rips up the letter just as the phone rings. Elizabeth asks her to come to Collinwood immediately.

Cyrus concludes his examination and determines there is nothing more he can do for Quentin. As he packs up his medical bag, Angelique talks to Quentin while he sleeps. Cyrus finds some of the things she says very curious. Angelique shrugs off Cyrus' claims and runs out of the room.

Angelique attempts another spell to undo the spell she placed on Quentin, but is unsure of her success. Elizabeth walks in and wonders why all of the lights are out.

Angelique says she was just trying to get some rest and wanted to be by herself, which seems to appease Elizabeth's curiosity. Elizabeth informs her that Maggie is on her way back to Collinwood, which excites Angelique.

Later that night, Maggie finally arrives, greatly disturbed by her husband's condition. Elizabeth reluctantly admits that Quentin didn't ask for her, and Maggie worries that he may not want to see her. She goes to Quentin's side, but he awakens, and tells Barnabas to send her away. Maggie states that she is there to stay.

Angelique: Fire, you have always been my friend. You and I have shared a kinship like no other. Be my kinsman now, and help me! Burn the pain from Quentin’s body! Burn away the spell that I have placed there! Fire — free him from what I have done! Fingers of flame, make healthy again what I have diseased!

Dark Shadows Everyday - Episode 1016 - Fire Is Not a Friend 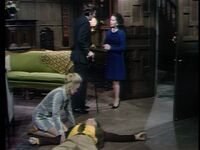 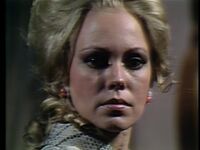 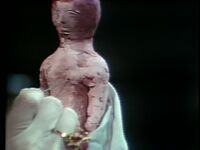 Voodoo Doll
Add a photo to this gallery
Retrieved from "https://darkshadows.fandom.com/wiki/1016?oldid=142613"
Community content is available under CC-BY-SA unless otherwise noted.