Angelique reveals her secret to Hoffman and casts an incantation causing Quentin to collapse.

Collinwood in Parallel Time, and Quentin Collins, master of the great estate, is in grave jeopardy. For Angelique, his dead first wife, has returned in the body of Alexis, the twin sister she has murdered. In a desperate gamble she has used the black arts to win his love. She has tampered with his deepest feelings to make him send for Maggie in order to destroy her. But the gamble has failed. Instead of sending for Maggie, Quentin Collins acts out a prophetic dream.

Quentin, becoming increasingly unstable due to Angelique's potion, writes a suicide note and goes to the attic room.

In her room, Angelique reads her tarot cards as Hoffman walks in. Hoffman is preparing to move Angelique's belongings because it is unsafe to stay in the parallel time room. She notices that Angelique is reading the cards, which is something that Alexis never did, and becomes very suspicious. As Angelique reads the cards, she discovers the Hanging Man card and rushes out of the room in tears.

Meanwhile, Quentin puts the noose around his neck, but Angelique arrives just in time to stop him from committing suicide. Quentin is upset that Angelique stopped him because he wants to be with Maggie in death, but Angelique manages to convince him that Maggie is still alive. As Quentin gets more and more confused with his actions, Angelique asks him if he is still in love with Angelique rather than Maggie. He can't bring himself to answer the question and leaves the room.

In the drawing room, Quentin tries to figure out why he has been acting the way he has been as he gazes at Maggie's portrait. Hoffman walks in and Quentin asks her to have Trask put the portrait in storage.

Angelique is in her room, talking to Hannah on the phone. Hannah wants to stop assisting her, but Angelique tells her that isn't possible. Hoffman interrupts and tells Angelique she has something she needs, and she gives her a voodoo doll.

Angelique finally admits to Hoffman that she really is Angelique, and thanks her for the voodoo doll that she will use to bring Maggie back to Collinwood. Angelique recounts being murdered and the time she spent in her coffin, and the stories seem to frighten Hoffman. But Hoffman swears her allegiance to Angelique and agrees to help her win back Quentin. Meanwhile, Barnabas enters Angelique's room, hoping to return to his own time, but instead finds Angelique and Hoffman. Hoffman excuses herself and Barnabas begins talking about the Angelique who lived over a century ago. Angelique doesn't seem to want to talk about her and quickly leaves. Barnabas surmises that she panicked because there was never an Angelique who lived at Collinwood in the late 18th century. Once he's alone, Barnabas calls out for Julia, wondering if she is watching from the other timeband.

Later, Hoffman meets with Angelique in the attic. She gives her the voodoo doll, Quentin's handkerchief, and a pin. She tells her it's time to bring Maggie home.

Angelique admits to Hoffman she is afraid of what might happen to Quentin, but prepares to begin the spell.

Meanwhile, Barnabas meets with Quentin in the drawing room. Quentin still believes that Barnabas isn't who he says he is. As the two argue, Angelique puts the pin in the voodoo doll and Quentin collapses in pain.

Hoffman: You were murdered, you know that.
Angelique: Of course I know. I felt the pain at the back of my neck. I felt the hand pressing the pin here. And I reached back — we must find out whose hand that was.

Dark Shadows Every Day - Episode 1015 - You Were Murdered 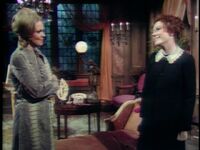 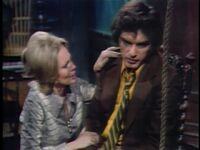 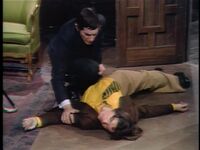 Collapse
Add a photo to this gallery
Retrieved from "https://darkshadows.fandom.com/wiki/1015?oldid=142610"
Community content is available under CC-BY-SA unless otherwise noted.