In a rage, Quentin slashes Maggie's portrait and recalls his dream of the hanging man.

Neither sound nor wind stirs the soft mists that shroud Collinwood on this night in Parallel Time. But the forces of darkness are alert, and can hear the quiet incantations of two women as they begin their insidious plot that can end only in the destruction of Quentin Collins.

Angelique casts a spell over Quentin to make him realize how much he loves and misses Maggie. She then goes downstairs to see him. Quentin grabs a knife and approaches her, but he slashes Maggie's portrait instead.

Quentin gazes at the slashed portrait and then collapses onto the couch, unable to explain why he did it. Angelique tells him he did it because he misses Maggie so much, but he thinks there's more to it than that. She tells him to bring Maggie back to Collinwood, but he leaves the house in a rage.

The next day Quentin goes to see Cyrus, and asks if it's possible he could be losing his mind. Cyrus comforts him and insists he's merely suffering from stress. Cyrus is disturbed to learn that Barnabas is staying at the Loomis House, but stops himself from telling Quentin about the coffin he had seen there (while he was Yaeger). Cyrus supports the idea of sending for Maggie. Quentin is just about to leave when a terrible pain takes over, and he is unable to control his emotions.

Later at Collinwood, Quentin and Cyrus discuss what happened. Quentin describes it as a feeling, deeper than any he'd ever had before: A yearning that was so great it brought physical pain. Cyrus sends Quentin upstairs to rest while he and Alexis discuss the incident. They both agree that it was caused by his separation from Maggie.

Quentin goes upstairs to the East Wing and sees Hannah, who is on her way out. She tells him she's worried about him, but he barely acknowledges her. He wanders through Angelique's room and picks up a deck of tarot cards, wondering if they may tell him something. To his horror, he uncovers the Hanging Man.

Hannah goes to Angelique and urges her to end the spell on Quentin. She believes that they have gone too far, and that the emotions they have triggered in Quentin may result in his destruction or their own. Angelique flatly refuses and insists that it will only end when Maggie returns to Collinwood.

Quentin stares at Maggie's torn portrait and sees blood dripping from it. He screams that he's killed her and knows now what he has to do. He writes a note, saying that he had to do this so he could be with the woman he loves. He climbs the stairs to the attic room, determined to hang himself.

Angelique: But there is always violence in love.

Dark Shadows Everyday - Episode 1014 - Are You the Quentin 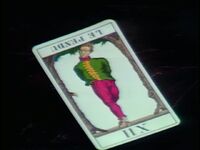 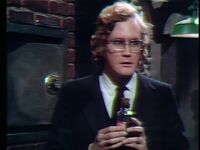 To Drink or Not to Drink 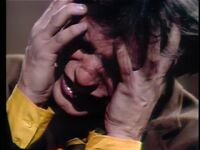 Quentin's Angst
Add a photo to this gallery
Retrieved from "https://darkshadows.fandom.com/wiki/1014?oldid=142609"
Community content is available under CC-BY-SA unless otherwise noted.