Quentin accuses Barnabas of being the same as the Barnabas that people in the other timeline are talking about.

The great house at Collinwood as it exists in the world of Parallel Time. A strange world where Barnabas Collins now finds himself meeting people who look familiar, but lead different lives. On this night, he has introduced himself to Quentin Collins, who in this time is the Master of Collinwood. Recently, Quentin himself has witnessed the disturbing Parallel Time phenomena that occurred in Angelique's room.

After discussing what they just saw in the East Wing, Quentin believes Barnabas comes from the other timeline.

Quentin accuses Barnabas of hiding that fact because of his curse. Barnabas pleads innocent and sticks to his original story. He does suggest that the family stay out of the room for the time being, as the mystery surrounding it cannot be explained. Quentin agrees. Barnabas questions Quentin about Alexis and Angelique. Quentin confirms that he had never met Alexis before her arrival one month ago. He suspects Barnabas is romantically interested in Alexis (Angelique), which he does not deny. Just then she arrives and Barnabas introduces himself. Barnabas quickly becomes suspicious of her and wonders if she may be the Angelique from his own time.

A painting arrives from Paris and Quentin is reluctant to open it. He explains to Angelique that it is a portrait of Maggie that they had commissioned while on their honeymoon in the French Riviera. He's visibly upset that the painting has arrived and Maggie still isn't with him. Angelique observes that he is still very much in love with Maggie and he must bring her back to Collinwood.

Quentin reluctantly admits that he does miss Maggie, but he will not try again to bring her back. He insists that it's up to Maggie to make the next move.

Angelique calls her aunt, Hannah, and asks her to come to Collinwood immediately. When she arrives she sees Maggie's portrait and guesses that she has decided to return. Angelique explains that she has not decided to return and that it's up to them to bring her back. She explains that Quentin can only think of Maggie, and with her away Angelique has no way to fight her. They decide to brew a potion to make Quentin obsess over Maggie's absence.

Barnabas returns to Angelique's room, hoping he can get back to his own time. He is caught by Daniel.

Daniel recognizes Barnabas from the portrait and immediately distrusts him. He tries to leave to find his father, but Barnabas does not wish for Quentin to know he was in the room, so he hypnotizes Daniel into forgetting the entire meeting.

Downstairs, Quentin has just hung Maggie's portrait in the drawing room when Alexis arrives with the potion. She fixes him a drink and leaves him alone with the painting as her spell takes effect.

In Angelique's room, Hannah admits that she is worried about the plan, and cautions that it may affect Quentin strangely. Angelique goes downstairs and finds Quentin coming towards her with a knife. She screams.

Angelique (to Hannah, about Maggie): She’s all he thinks about! And as long as that’s true, I haven’t any hope of winning him back! As long as she’s in New York, I can’t fight her! I want her here, where I can deal with her! 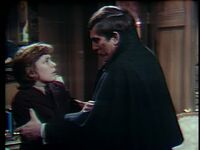 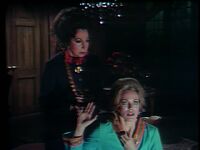 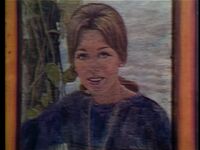 Maggie's Portrait
Add a photo to this gallery
Retrieved from "https://darkshadows.fandom.com/wiki/1013?oldid=143672"
Community content is available under CC-BY-SA unless otherwise noted.