Yeager discovers a hidden passageway and follows it to the Loomis House basement.

The great house at Collinwood as it exists in the mysterious and disturbing world of Parallel Time. A world which Barnabas Collins entered hoping to escape from the curse that has plagued him for so long. But in this new time, William H. Loomis learned Barnabas' secret, and has him trapped in a chained coffin. On this night, however, certain events that occur will change the fate of Barnabas Collins, for better or for worse.

As Larry awaits Horace in front of the Eagle, he hears screams coming from a nearby alley. Yaeger hits Horace over the head with his cane and he stabs him. Larry shows up and Yaeger attempts to hide.

Yaeger finally reveals himself and attempts to run Larry through with his knife, but he runs past him and escapes back to the lab. As he prepares to get the potion to turn back into Cyrus, he hears Larry upstairs talking to Sabrina, wanting to see Cyrus. Yaeger runs out through the side door just before Larry and Sabrina enter the lab. Larry tells him that a man who he thinks is Yaeger killed someone outside of the Eagle, and decides to call the police. Cyrus ponders how he can gain access to the lab and get the antidote.

Later that night, Buffie is closing down the tavern and Yaeger meets her in the alley. Yaeger asks her to do him a favor.

Buffie doesn't want to help him, but Yaeger threatens to kill her if she doesn't cooperate. She reluctantly agrees, and Yaeger gives him a key to the side door of the lab. He instructs her to get into the safe and get a potion for him.

Meanwhile, Sabrina is wandering around the lab and the phone rings. It's Yaeger, pretending to be Cyrus. He tells her that he will be "out of town" for the night, and will be back in the morning. Sabrina seems to note that "Cyrus" seems to be acting weird. She also asks if he has seen Yaeger, as there has been a murder, but he tells her that Yaeger is also out of town. He tells Sabrina to lock up the lab and leave for the night (so Buffie can get the antidote). Yaeger instructs Buffie to bring the antidote to a cave entrance underneath the Collins estate.

After getting off the phone, Sabrina begins to lock up the lab and Larry enters. Sabrina recounts her phone conversation with "Cyrus," and tells Larry that he seemed to be acting very differently. Larry dismisses her claims and informs her that the man who was murdered was Horace Gladstone, which stuns Sabrina. Sabrina reveals to Larry that he and Cyrus knew each other.

Sabrina and Larry discuss the murder and Horace's relationship with Cyrus. Meanwhile, Buffie approaches the outside door and is about to enter, but she hears voices and waits. Larry mentions to Sabrina how he was supposed to meet someone named Horace outside the Eagle, but obviously never did. The two finally leave, which allows Buffie to enter the lab and get the antidote.

Meanwhile, Yaeger arrives at the cave and as he waits, he notices footprints in the sand leading to a secret passage. He follows the passage and finds himself in the basement of the Loomis House. He discovers the chained coffin and prepares to open it. 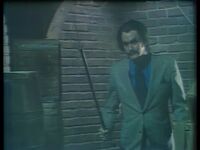 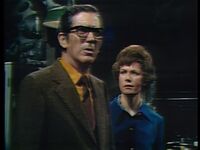 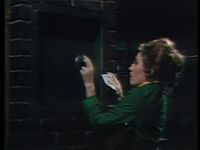