The great estate of Collinwood as it exists in the strange and disturbing world of Parallel Time. A time in which each person follows a new destiny. On entering this world, Barnabas Collins hoped to find an escape from the curse that has plagued him for so long. Instead, he became trapped in a chained coffin, the prisoner of a half-mad author named William H. Loomis. But in recent days, evidence has come to the surface that something mysterious is going on in the Loomis House. On this night, Quentin Collins tries to solve the mystery by holding a seance.

During the seance, Angelique notices someone is standing in the corner watching over them.

The ghost of Joshua Collins appears to Quentin and Angelique and identifies himself as Barnabas' father and the former Master of Collinwood. Quentin asks for help, but Joshua tells them they already know all they need to know about Barnabas. However, Joshua warns them that an evil presence is at Collinwood, someone who is both living and dead, and the presence must be destroyed. Joshua disappears, leaving Quentin and Angelique confused and wondering how they can find out more about Barnabas. They both decide they must talk to William as soon as possible. Roger enters the drawing room and wonders why all of the lights are out, and Quentin explains they were holding a seance to contact Barnabas. Roger thinks Quentin should let the whole Barnabas scenario go, but Quentin declares he will find out everything about him, by any means necessary.

Cyrus is working in his lab when he hears a knock on the door. It's Horace, who has a new package of the formula for Cyrus. Horace demands $10,000 in cash for the package, but Cyrus refuses and orders him to leave.

Horace thinks Cyrus is joking, but Cyrus says he won't give him a penny, despite Horace's claims that people in Collinsport will soon realize Cyrus is also Yaeger, and vice versa. Horace then reveals that he took handwriting samples from Cyrus and Yaeger to a specialist, and knows they were written by the same person. He gives Cyrus 24 hours to give him $10,000, or else he will expose him.

At Collinwood, Quentin and Larry are signing documents and Quentin notices Cyrus' new will in Larry's briefcase. Quentin ponders over the fact that Cyrus' attitude has changed since Yaeger showed up in Collinsport, and wonders why he would change his will so suddenly. The phone rings and it's for Larry. Horace is on the other line and tells him he has a document pertaining to Yaeger that he might be interested in. Larry becomes very intrigued and agrees to meet him at the Eagle Tavern at 10pm.

Angelique is sitting by the fire in the drawing room as Roger watches over her. She finally notices him and the two begin casually talking about the times before Angelique died. Roger admits he was secretly and madly in love with Angelique, and often thought he cared about her more than Quentin did. Angelique, still posing as Alexis, tells Roger she remains determined to discover who the murderer is.

Larry meets with Cyrus at his lab and presents him with a new will that agrees to give everything to Yaeger in the event of his death, but Cyrus tells him he is re-considering the changes he made. After some small talk, Cyrus learns that Larry is going to meet with Horace at the Eagle in a few hours. Once Larry leaves, Cyrus prepares to take the potion.

That night, as Horace awaits Larry in an alley outside the Greenfield Inn, Yaeger approaches him and says he has the money he wants. Horace is frightened and tells him not to worry about it, but Yaeger continues to threaten him. Yaeger hits him over the head with his cane and stabs him. He hears Larry in the distance and attempts to hide.

Ghost of Joshua (to Quentin and Angelique): You are of the living. I am of the dead. But this evil of which I speak is both.

Roger (to Quentin): I can't imagine why you're interested in anything about Barnabas Collins. According to Will's first book, his life was singularly dull. In fact, I find the book an improvement over sleeping pills. 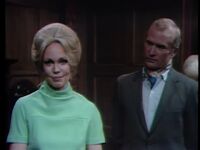 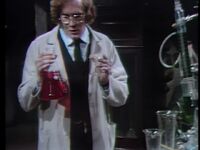 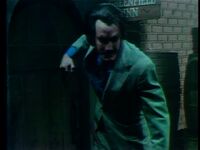